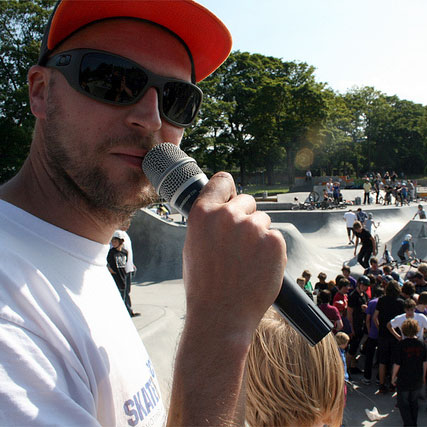 Ali has been in this role since 2005. He has been skateboarding in Edinburgh constantly since 1988 barring a few breaks to heal broken bones. Initially his days were spent at Bristo Square street skateboarding until the new dawn of Concrete skateparks in Scotland. Although the closure of Bristo Square is still a sore point. He can now be found skating Saughton skatepark in Edinburgh a few times a week with his son Kieran who rides for Santa Cruz. He also has two other kids which keeps him busy. He spends a lot of time trying to organise events for Skateboard Scotland such as War of the Thistles and has also recently represented Scotland’s voice at various Skateboard Summits organized by the World Skateboard Federation both in Istanbul and South Africa. To pay the bills he currently works as an Assistant Vice President for a corporate bank. 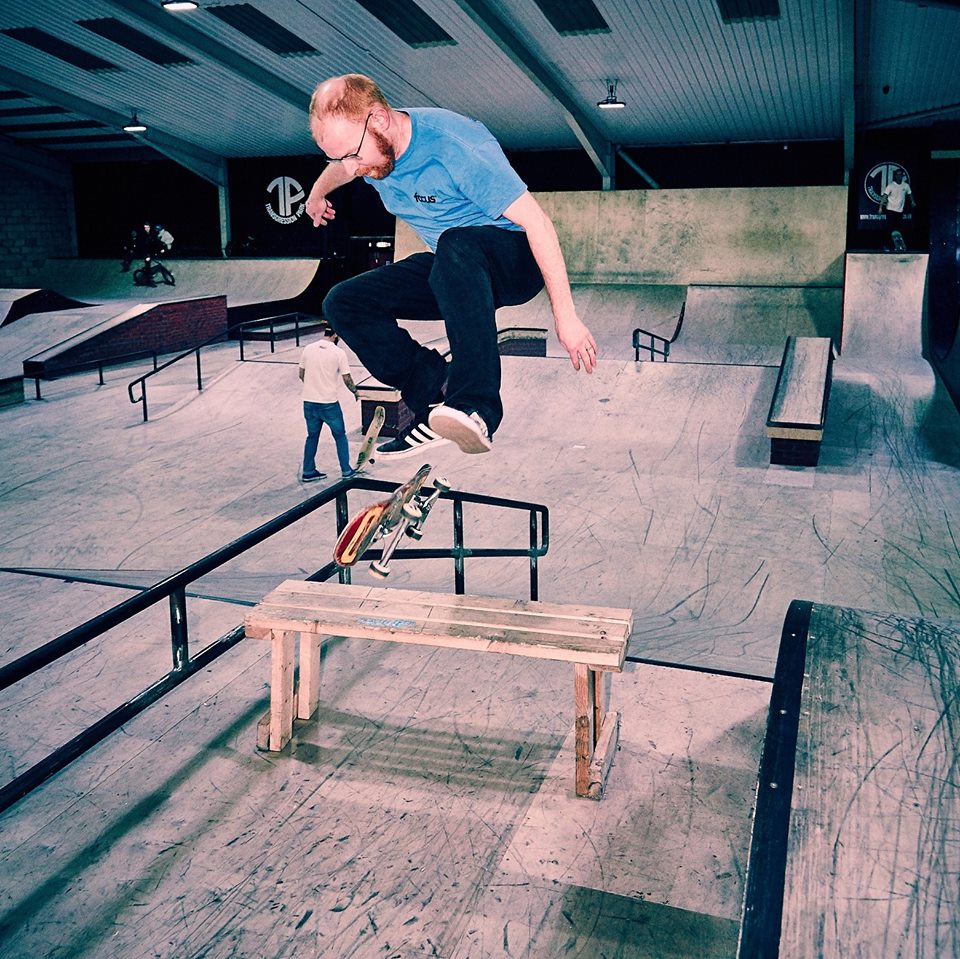 Sam started skating in Glasgow in 1987 and spent 3 years working in Clan skates before moving to Edinburgh in 1993 where he’s lived ever since. Sam works for a coffee company and skates with some of the old Bristo crew every week. 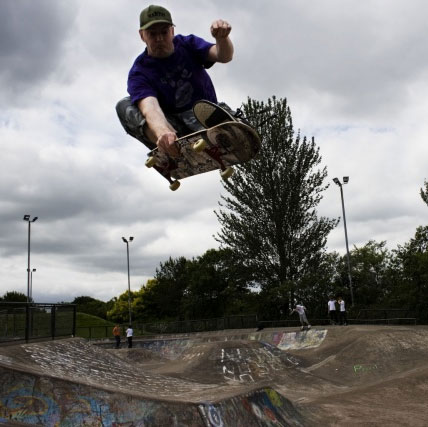 Neil has been skateboarding since the early 90s.  A father of 2 living in Fife and working in Edinburgh. Whenst not carrying out fatherhood duties or skating he can usually be found behind a camera or devising new and ingenious ways of using up spare time. 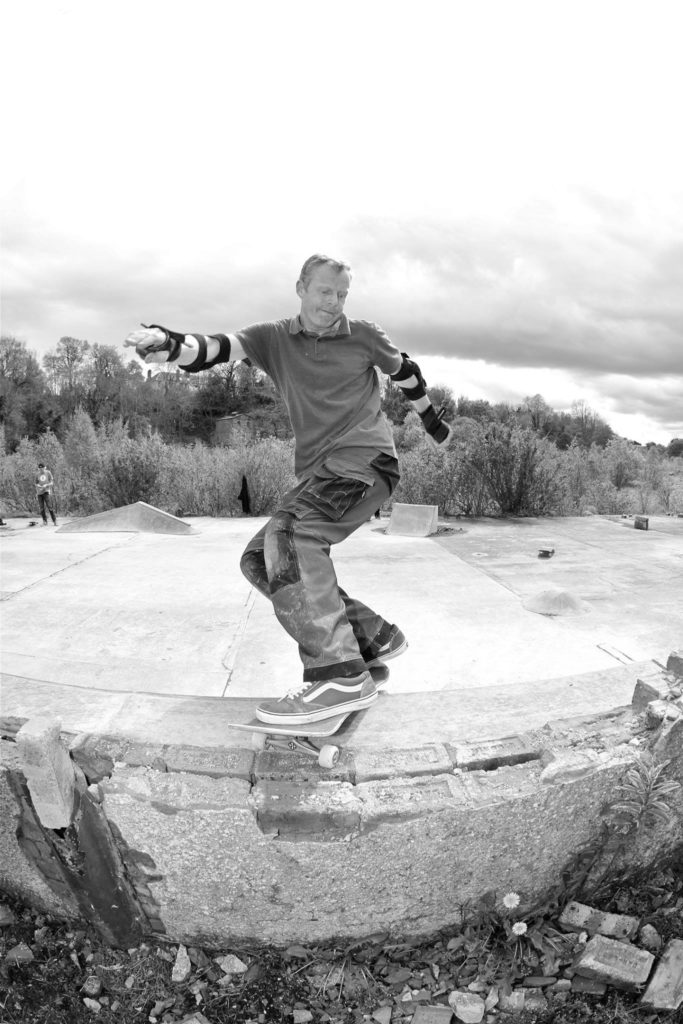 But for that pesky Mr Omond, Murray would claim to be the veteran having skated since the 70’s. Two of his sons have thrived on the skate scene thanks to all of the work done by Skateboard Scotland. Murray has been involved in the grassroots/diy build scene in Edinburgh since 2012 and can be found most weekends skating anywhere around the central belt . 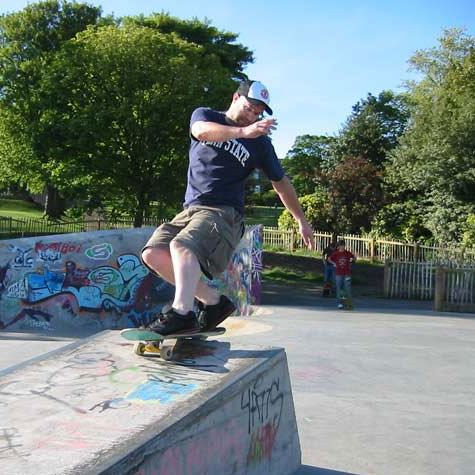 Rick started skateboarding after watching ‘Future Primitive’ in 1985. Rick has been actively involved in skateboarding since then and helped design and build The Factory skateparks that have been built in Dundee since the late 80’s. His main skatespot is the concrete park in Dudhope Park. Rick’s day job is web design & development. He’s married to Annie and has three children, Natalie, Gabriella and Timothy. 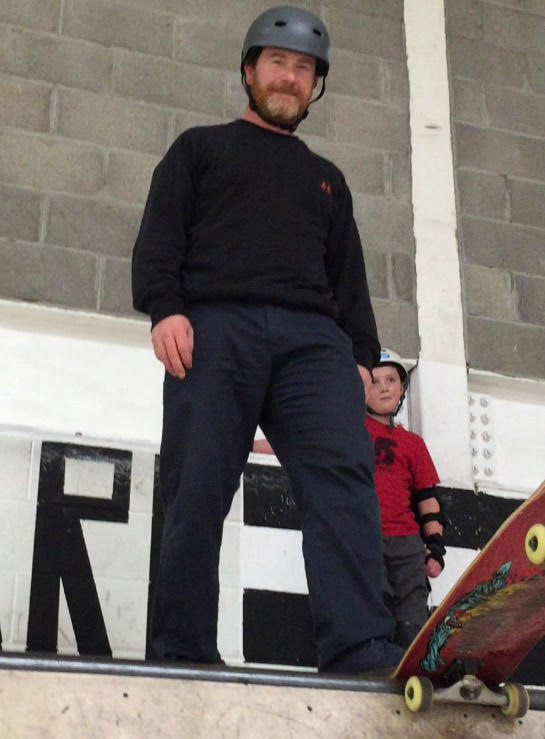 Born 1972, 1st skateboard in 1982, followed up with meeting Russ Hall in 1984 when he stopped me pushing mongo! Early years in Linlithgow, Edinburgh and a Livi regular for many years. Travelled overseas for a while, skating and snowboarding. After seasons travelling with my wife Debbie, we moved to Aberdeen for 10 years, had three boys and then moved to Banchory where we’ve been for the last 14 years. I set up a Charity “Banchory Skatepark Group” with friends in 2017 to build a new concrete skatepark in Banchory which opened in 2022.
my quote – “Skateboarding should be managed by Skateboarders – we’re a lot smarter than we look!” 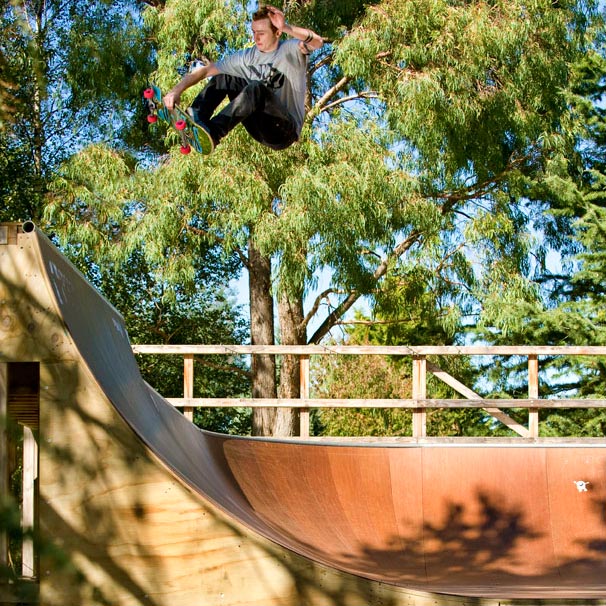 Taran is 33 and from Inverness. He helped create the Highland Skate Parks Association and has spent about half his life trying to improve skateboard facilities in the Highlands.
His greatest success will be the building of the new Inverness Skatepark this summer. He organises the local skate events and trips as well as running skateboard workshops and clubs.
He has a lifelong addiction to skateboarding and travel and is unstoppable at connect 4! 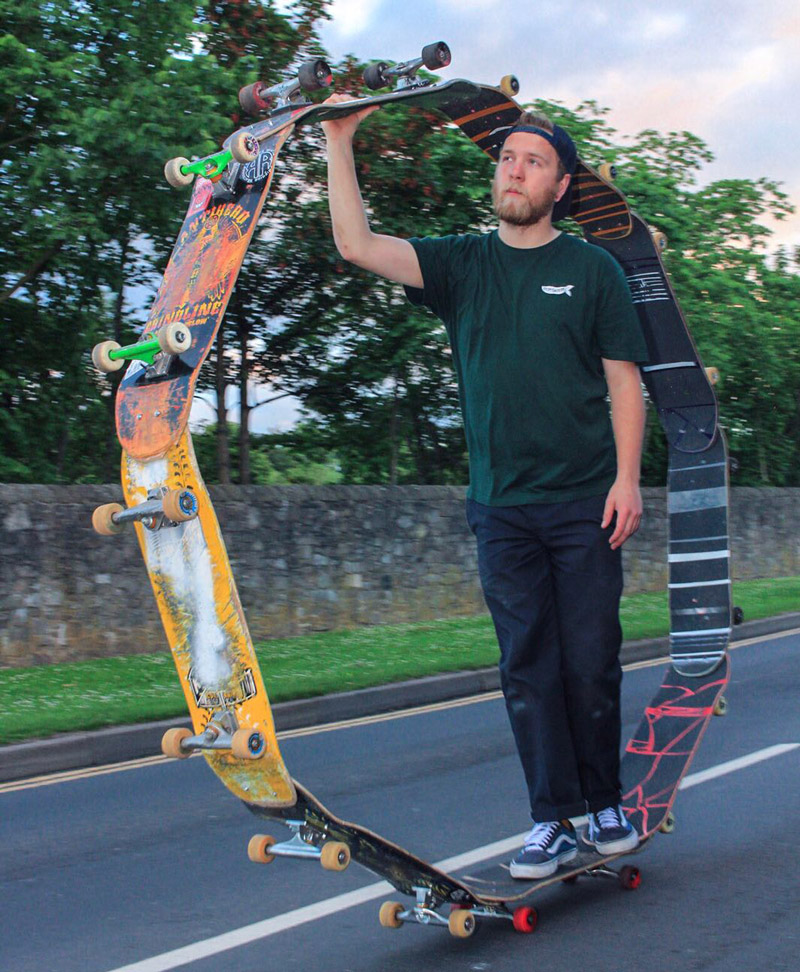 Liam started skating around 15 years ago and hails from Perth, (the best park in Scotland that everyone forgets about haha) loves a good trip to Copenhagen or anywhere with some good bowls, theres nothing better than a good frontside grind on some pool blocks!  He has been helping organise the Perth jam for the last 4 years or so, tasks ranging from organising sponsors to running the event on the day. Its always a blast so make sure to look out for it! 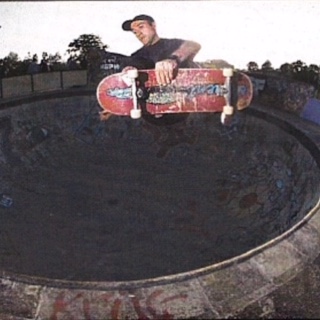 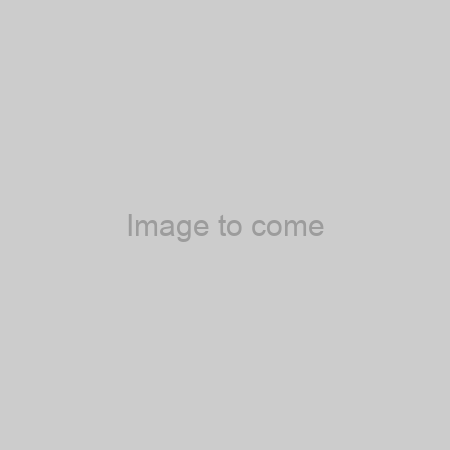 GB Snowsport. Head Coach, Freestyle Snowboard.
Beginning his career as a professional snowboarder, Hamish remains to this day a time served and committed skater. Throughout his successful career as a Team GB Head Coach he has led our national team program and athletes to numerous medals in Olympic Games, X-Games and many other world class competitions. Currently working on the Masters in Sporting Directorship through Manchester Met University he’s also able to apply his wealth of action sports knowledge and experience at an executive level. 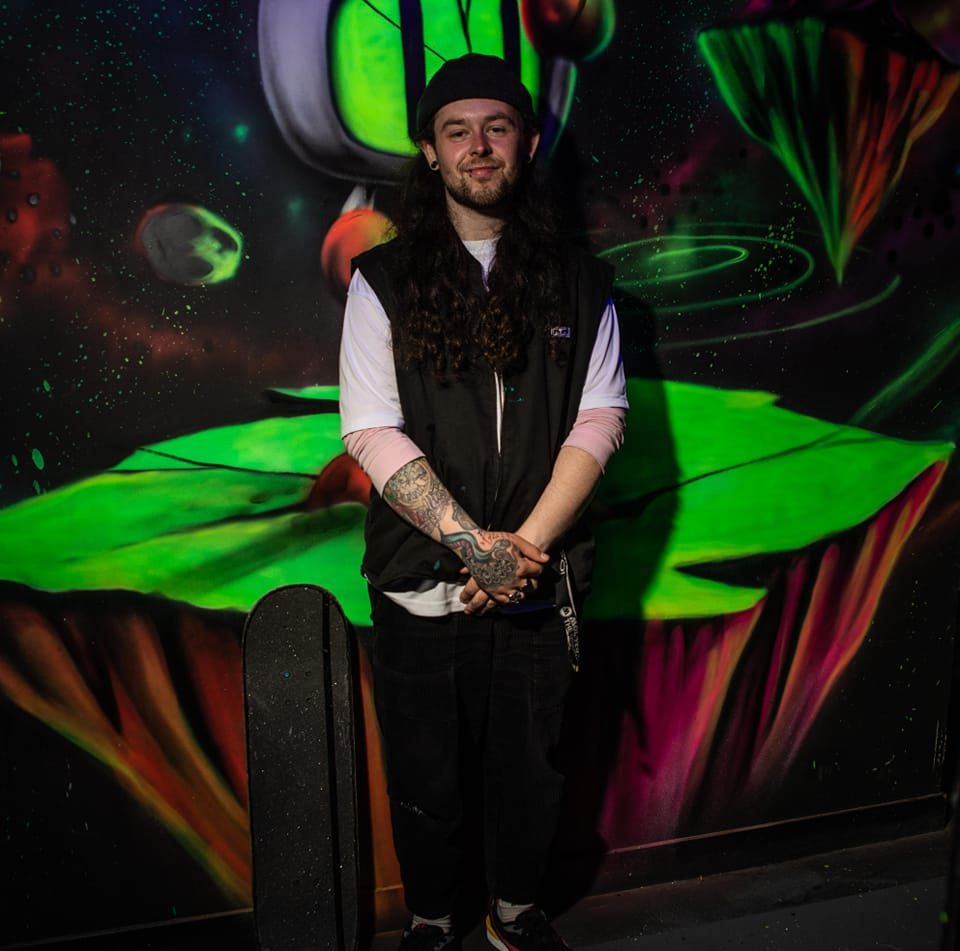 With skateboarding being a huge influence in my life, it led me to joining my brother Mark on an SB business venture that threw us deeper into the skate scene and meeting the people within it. From running the shop, hosting events/competitions and meet ups, It’s the passion that skaters have for their sport that drives me. 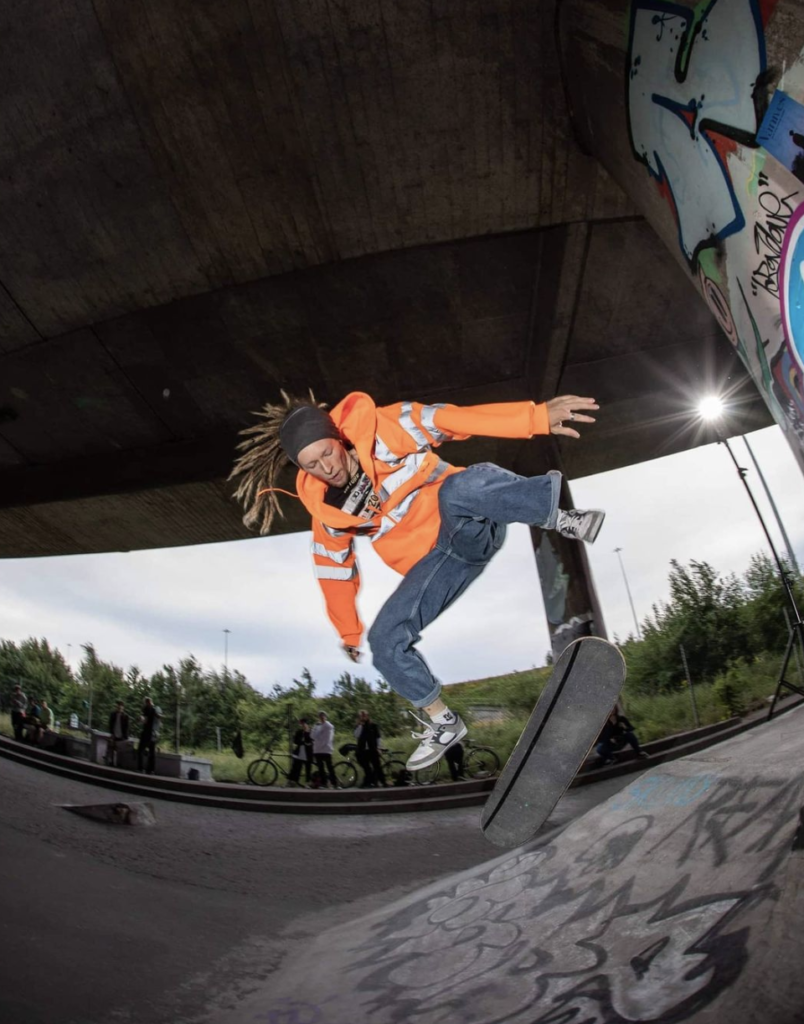 Growing up in Glasgow skating the streets, it’s been a passion of mine since I was 13, then started FakieSB with my brother Paul to keep doing something we love along side making it our job! After kitting the shop out with a mini ramp and spine, we can still get a skate in amongst all the work even if it’s the typical Glasgow weather outside, which also makes for the best lunch breaks.