Sunday the 13th of June saw the first ever jam at the
Dunfermline skatepark. This was originally planned as
being an “official” event, with Fife Council
being involved; but although the council have done a
great job with supplying a large number of skateparks
(19 at the last count), the bureaucracy was the same
as always and we couldn’t get a permit to use
the park on the day. 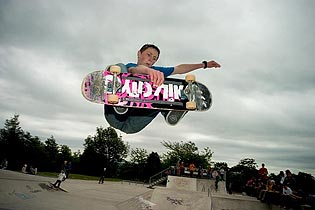 Unfortunately, the posters had already gone out (thanks
to all the shops that displayed them) and we went ahead
anyway. Most kids here had never seen a pro skater in
the flesh, and Lee Blackwell and Wag from the Death
team didn’t disappoint the three hundred or so
watching. Blackwell destroyed the dusty trannies with
huge frontside airs over the roll-in, whilst Wag nailed
a selection of fine flips on the various obstacles,
before nailing himself trying to b/s flip the wedge
(hope your knee gets better soon dude!). 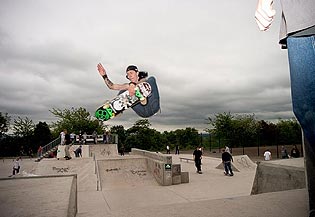 The under 13s kicked off around 1pm and took a good
hour and a half to get through them all, the little
guys shredded with all kinds of craziness going off.
12-year-old local Kenneth O’Brien’s transfer
to b/s disaster, from the big quarter to the flat bank
won him the first “mesh cap challenge” award
for sheer gnarliness.

The 14-16 category was hugely competitive, with one
guy slamming hard seven times in a row trying to ollie
the stairs from the big quarter. We didn’t tell
him, but we called time 20 seconds early on that run,
to avoid a potential manslaughter charge! 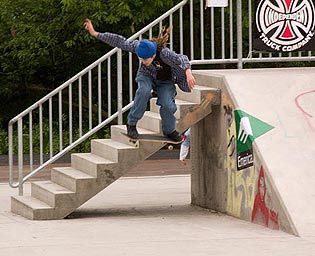 The two Perth locals Mean Dave and Dougie have obviously
benefited from having the best park in the UK on their
doorstep; they dominated this age group and picked up
first and second place respectively. Dougie was on fire
all day and his huge gap from the path (outside the
park) over the rockery and onto the hip won him mesh
number 2. Dunfermline local Brandon Cross took third
and also won the final mesh for his handplant/ body
jar affair over the funbox rail.

The 17 and over comp was next, we were hard pushed
to find many skaters over the age of 17 on the day,
but those that did ride, killed it. Highlights were
Morbid’s huge melon over the funbox, Mark Davies’
tre flip transfer and Melv’s manual around the
entire park. Bobby Baillie gave it his best shot and
tried to krook the tiny round rails, but he just couldn’t
seem to get the four down on the day.

The team comp marked the end of the day, just before
the rain started and everyone involved went for it.
“Team Bum” entertained us most by smoking
fags and scratching their nuts during their run, but
on the day, it was the Perth lads and Morbid’s
team that took 1st place closely followed by the Black
Mark team.

The inevitable sticker/product toss ended the day at
the skatepark with some quality backyard wrestling style
antics, but no one was hurt too badly!

Then it was off home for dinner, before heading to
Monty’s in the town for the Scottish premiere
of Squadrophenia, the new Death video, and a night of
old school videos with the man of the moment, Melv,
providing the beats. The vid was excellent and very
entertaining; a good night was had by all.

For too long Scotland in general, outside Perth and
Livi, has been largely ignored by the pros. There at
least 25 parks (including Perth and Livi) within half
an hour’s drive from here, so you guys are really
missing out, just ask Blackwell.

Thanks to Eastpak, Shiner, A4 distribution, OG distribution,
Skateboard Scotland and especially Power distribution
for providing some excellent prizes and for all their
help.