With the forecast promising a very, very wet one, the
Jam was in doubt from the start but with this being the 4th annual E=B2 Jam
we knew the sun would be around somewhere sometime. Sure enough at midday the
clouds parted and the Jam began. 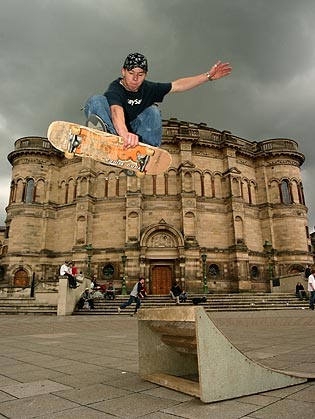 This year was the first time we had an under-12’s
group and it kicked the Jam off. Some fine skating from the riders of the
future ended up like this… 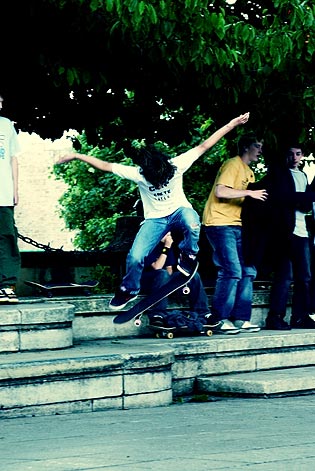 Next up was the 12-14 group, again a new group, a great success and by far
the buisiest as far as entries go. A late entry by kid named ‘Damien’ who was
only 10 years old surprised all with kickflips off the top ledge and stand
ups on the grindbox. Results… 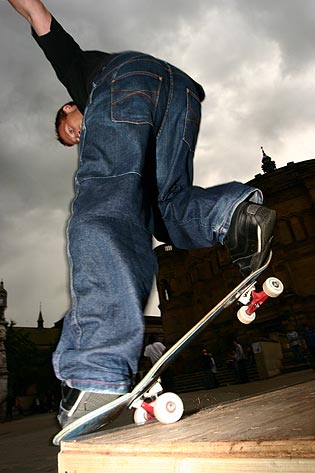 About this time the sky got dark and some big drops fell but Animal Chin was
with us and the sun shone through. We decided to mix up the next 2 groups (15-17
and over 18’s) mainly because of the lack of older skaters willing to enter
the Jam. This was by far the best section for skating with Harry nailing everything
in his first run, mostly fast flatland flips done smooth and solid. Mark92
skated in his unique and effortless way with big kickflips
and fast half cab noseslides on the bench. Then it was all about young Mark
who put together a varied run, hitting the monument, ledges, grindbox and
mixing in some flatland trickery. Results… 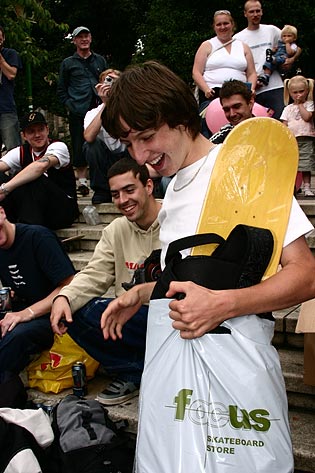 The traditional team jam was next with some good representation from across
Scotland. As always this section gets pretty chaotic but team ‘Gryffindor’
waved their wands and emerged victorious and were rewarded with 2 huge trays
of cookies and donuts kindly donated by Subway!! After the prizes were handed
out the product toss ensued and the riots began. It has to be said here that
when you enter into a board toss you have to realize that everyone around you
wants said board as much, if not more so, than you do, so your going to get
hurt, simple. The usual tussles happened and the usual kids cried, with a couple
of idiots trying to spoil the day, unsuccessfully.

Altogether another fine Jam for the homegrown E=B2 label and the Bristo kids.
Big ups to all the skaters who traveled from Perth, Dundee, Aberdeen,
Glasgow, Livi and elsewhere – thanks.

Thanks to Skateboard Scotland for assistance, Subway for the goodies and
to Rusty Ramps and Ali M for the ramps and grindbox.

Skateboard Scotland would also like to thank Edinburgh University for allowing
the skaters a safe place to practice their sport.

Peace until next year.