Andrew was the lucky winner of the Sprite Urban Games
ticket competition, and won four tickets for the event. Here’s his report
on the day. 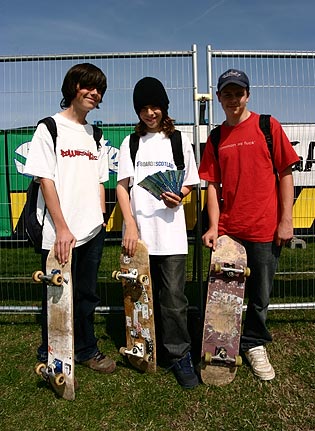 Well to begin with I would like to say thanks to Skateboard
Scotland for making it possible for me and my friends to go to the Sprite Urban
Games and also for making a great commitment to skateboarding.

Me, my dad and my two mates headed up to London in a coach on the Friday
night so we’d get there Saturday morning.
We met up with Joe and Shiel once we got there to receive our prizes and got
our pictures taken. Once we got in we were dying from the hot weather, much
different to what I’m used to back in Scotland.

We went to all the facilities
in the place and each one was great. Breakdancing, all the stalls, Moto Cross,
BMX, but the best was the skateboarding. Some amazing skateboarding from Danny
Wainwright, but my favourite skater of the day was Lee Blackwell. It was funny
when it was Lee Blackwell’s 2nd heat of the first street finals and ‘The Ace
of Spades’ came on and he done a huge tail grab then straight after
flykicked someone.

Also there was some insane stuff coming from the breakdancing,
only problem was that the line went on for miles to get in. The stuff they
were doing was crazy, if I tried anything like that I would probably break
my neck.

The main attraction for my dad was the Moto Cross, he got some killer
photos of the Moto Cross. When the Street finals were on every 30 secs
you would see these bikers going sky high in the
background, so we were able to watch both at the same time. But altogether
the day was well worth the coach ride.

My dad and friends who came would also
like to say a big thanks for giving us the tickets. For everyone who didn’t
go this year, next year you should plan on going because the day is really
something. Expect to see us back next year.