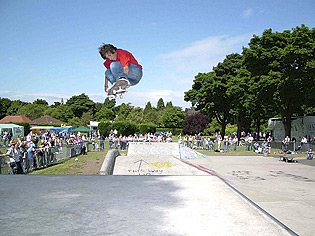 Kirkcaldy Skateboarding competition got off to a great start on 2 July, the
clouds were there but the sun made an appearance throughout the day.

First heat, 12 and under, were six entrants from around Fife. First up, Jamie
Garrie (Leven) pulled a backside 180 on the halfpipe, with Kieron McIntyre
(Cowdenbeath) doing a text book 180 ollie amongst other tricks.

Third place went to James McGregor (Cowdenbeath). Included in his run an ollie
nose disaster. Alexander Richie (Cowdenbeath) got second place with a show
of fillers, melons and combos. Mathew Welsh (Leven) ripped the park apart with
a backside 50-50 and backside ollies to take first place. 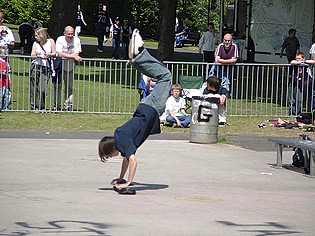 One o’clock seen the start of the 16 and under. A total of 12 competitors,
again from all over Fife entered. First up was Stefan Harkins (Kirkcaldy) who
pulled off lip tricks and floaters, now game was on, Graeme Fleetham (Dunfermline)
with one footed manual, freestyle and flips.

Third place went to Mars (one of the few girl skaters from Fife) with smooth
flips around the park; second place went to Scott Ramsey (Kirkcaldy) backside
180’s, fakie flip, mellow trailslides to name a few.

The time approached what the crowd had been waiting for, 17 and over heat,
and when the time arrived they weren?t disappointed. Highlights were Stuart
Hill (Kirkcaldy) with a 360 boneless, for his first move, Neil
Currie (Dunfermline) popin Frontsiderock, Sean (Kirkcaldy) a nice slashgrind.

In there at third place with a nollie 360 was Monty (Kirkcaldy), Kenny (Kirkcaldy)
put in a frontside noseblunt slide to take 2nd place.

The man of the day had to go to Haggis (g/rothes) he shot into the arena hit
the halfpipe and done a hand plant without any effort shown. His run was aggressive
but very smooth throughout, and gained first place in his heat.

The first place winner from each heat went through for ‘The Kdy skater 2005’
trophy. Mathew Welsh, Russell Maxwell and Haggis had a two minute skate jam
(3
have run at the same time) to decide who deserved top prize. The judges had
a winner within the first 30 seconds (Haggis), but who would get 2nd and 3rd?
Mathew stole 2nd prize under a lot of pressure, and
Russell got 3rd place.

The day was finished with a 5 minute skate jam for the
best trick. 40 skaters rolled onto the park, skateboarders from the age of
5 and up were
doing their best trick to influence the judges, fakie 360s and front flip
melons, grab/slam backside to name a few. Scott Ramsay (Kirkcaldy) won the
prize with a pop shove it tail grab (very nice).

Big thank you, to YMCA for the dj equipment,
DJs Dodd, Loyd and the other Loyd, KSBI for the photography (Jack), DB Boardstore
for the prizes and trophies,
and all the spectators who came to watch and support the skateboarders.