Since the first article [https://skateboardscotland.com/news.php?id=040701]
about Dundee’s upcoming ‘concrete skateboarding facility’ in
Dudhope Park was published here in Skateboard Scotland, approximately this
time last year, the plans have changed dramatically.

Instead of having to trawl through the forum to get the REAL DEAL on the park
updates; In this new article I will attempt to condense some of the details
that have been discussed /disclosed last year, and illustrate the site with ‘artist-impressions,’ and
captions…

Building should start on the 28th or 29th of July (instead of the 25th, as
previously announced, to avoid a Dundee public holiday,) and these descriptions
will then become academic anyway… The contract is slated to last 16
weeks, so should thus be finished mid/late November.

The size of the park is now a little less than 1000 square meters, and has
been repositioned and enclosed by grassed mounds; so as not to impinge functionally,
visually, or audibly on the nearby residents, or Dudhope Castle, the listed
building that gives the park its name.

The park, in theory, has skate flavours from sources as far apart geographically
as can be. Not just for the sake of it mind you…

From Wallows, a drainage-ditch
built by the US Army Corps of Engineers in Hawaii in approximately 1950. (I
am currently checking this fact…), to Stockwell
Skatepark in London, purpose built in the 1970’s.

Small features like the bowled wall ride (3 meters high with a 3 foot transition)
will, I’m pretty sure, be unique, at least in the UK. The park contains
from 12 to 20; ollie / air / transfer-able: hips / bumps / sections, depending
on where you want to ‘draw the line’ or how you want to theoretically
define them, or indeed SKATE them. The aim of this small park is continual
flow and linkage. We have neither the space nor the money to build anything
properly BIG, so our deepest section is only 6 feet, but it’s based on
tried, true, and most importantly, FUN, dimensions. We hope it will work.

These are some photoshopped-up images of the model I made, with actual photos
of Dudhope park. 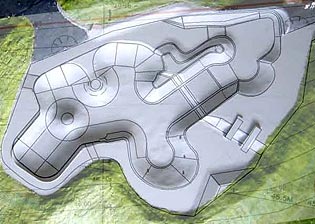 Here’s a construction plan roughly dropped onto a photo of the model.

What? Oh; Lens distortion prevents me from easily fitting the photo of
the physical, 1:100 scale model onto a purely 2D plan perfectly…Yes… there are ways and means, but it would take a long time and it’s
fiddly, I’ve distorted the plan as it is, and I can’t be bothered
to be honest; we get the REAL thing soon. Ok? 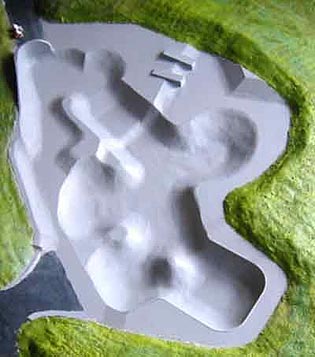 A somewhat uncomfortable; ‘Bird’s eye’ view of the park
model. It gets even worse if you start considering that birds don’t see
in the same colour spectrum as humans. I’m feeling sick. Are you?

It’s just the angle of the camera, sorry. 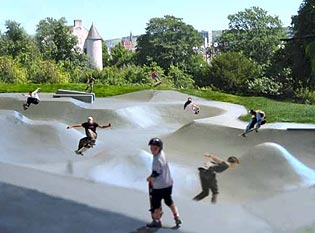 These are some dudes I found on the web, and ‘invited’ along to
skate the park, via the magic of ye olde photoshoppe I really hope they don’t
mind me enslaving their images like this; ripping them bodily from their native
spots. I mean it’s not like Guantanamo Bay or something. They seem to
be having a good time flying in the air, freakishly all at the same time. Except
for the Guy on the Block, who is really into his nose-grinds. The kid, well,
he was just wetting himself with PURE STOKE at seeing these guys go off all
at one spot. Previous, you see, he had to leave his little home, (A murky photo
of some park in Canada, where he lived with some other groms, eternally doomed
to be flailing around in the bottom of a mini-bowl,) and trawl his wee helmeted
head through the dangerous and uncharted sea of ‘tinterweb to see these
guys skate. Now, here they all are; performing like whipped circus ponies at
his feet.
Oops, no. Sorry, my mistake. It’s just a shadow.

This ‘photo’ is ‘taken,’ ‘looking south / south-east’ towards
Dudhope Castle, the river, and Dundee City Centre. (My, ‘I LOVE’ inverted
commas) 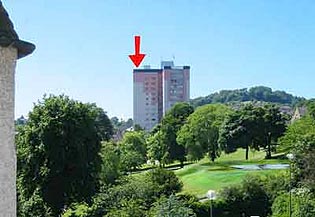 Here are two composite photos of the park taken from the two obvious vantage
points nearby. This first one shows the park (yep, that little sliver. That’s
a GOOD thing for planning permission…) from a top window in Dudhope
Castle, the red arrow indicating where I took the NEXT picture from. 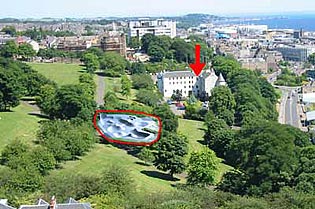 If we could see through the trees that border the site; this is what we could
see of the park, from the roof of ‘The Pink Multi.’ The red arrow
indicates where in the castle I took the previous photo from. 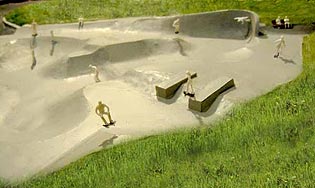 Ok, this image isn’t quite so convincing, as the one with the other
dudes, what with the plastic figures and all… But hey! I want to get
this article up already, and I have enough virtual, international hostages
as it is!

Sorry, a moment of modeling frustration there…