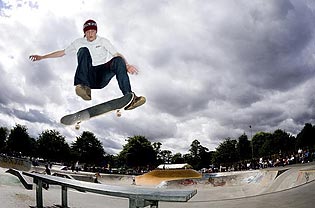 Now four years old, Perth park has become well
established as one of the finest parks in the UK, never
mind Scotland.

This year’s jam proved that it’s not only the ‘crete
that deserves such acclaim but the Perth skate
community and it’s well kent figures such as Glen Wood
who has yet again been instrumental in putting on what
has developed into one of the best events in the skate
calendar.

Once again the weather blessed the park by keeping the
rains that were battering down in Edinburgh south of
the Forth and topping off the high temps with
occasional periods of sunshine which turned the park
tropical.

The number of skaters was possibly slightly down on
last year allowing everyone loads more room and the
opportunity to lay down some amazing runs and fine
trickery.

The comp itself was to take the form of heats and a
final for the U/16s for top prod and some cash prizes
for the most spectacular displays of wildness in a jam
over the rest of the afternoon by the 16s and up,
throughout which the U/16s continued to rip. The U/16s comp was possibly the
best turn out I’d seen for that age group proving that the Tayside towns were
continuing to produce young skaters who only know one
way to skate – hard.

The heats were well skated and with seven skaters
progressing into a final which was of a standard which
would do any comp proud regardless of age group.

As usual remembering everyone’s names proved a problem
and trying to see everything going on would require eyes
in the back of your head. The footage recorded swung
around the park trying in vain to locate the subject
of Glen’s running commentary on the PA. Every time he roared "Oh aye man!!" I
knew I’d missed another trick somewhere in the park.

With the big beats banging on the PA the U/16s ripped
it up despite already having skated for hours in the
sweltering heat. I was mightily impressed by the ability of this
lot just to keep skating nevermind pull of some off the
tricks. 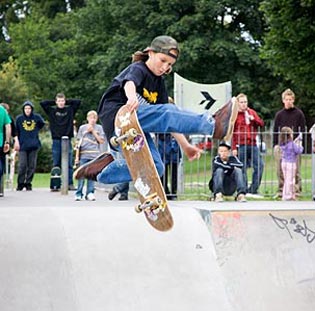 Some persistance and determined skating saw Grant from
Kinross pull a well earned 360 air over the spine much
to the crowd’s delight right at the death but the top
drawer prizes, provided by Edinburgh’s Focus and
Dunfermline’s Black Mark skate stores along with
Kingpin skate mag, thanks to the intervention of the
bloke in the burger van (sorry but didn’t get the
name), went to Ryan of Perth, the kid doing the
airwalk over the kicker in the photos and "Mushy" all
of whom went home with bags bulging with decks and
product.

The over 16’s jam kicked off with a ridiculous sesh in
the bowl with the icing provided in the form of a
sonic set by Newport punksters Fragile, set up right
alongside. Not only did the band provide a riot of sound but a
running commentary to accompany Glen’s brilliant
MCing.

An enthusiastic and appreciative crowd quickly
gathered around the bowl to watch Ferg, Blair
McCafferty, Dave Caldwell (watch the video clip and
listen out for that new monicker!), Addi, Ally, Dave
Laird, Young Mark, Switchstance Jim and some others I
am ashamed not be able to namecheck, rip it up for the
best part of an hour. 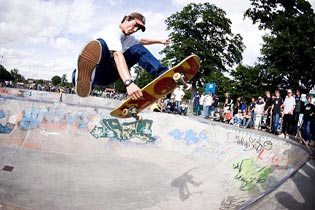 The sun was out, the sounds were up and the tricks just
flowed. The quality is not what you do it’s how easy
you make it look and I went away thinking "that looked
so easy why can’t I pull it off!!"

A camcoder battery and tape change passed and the jam
moved over into the park proper and continued with The
Duge making a mockery of every gap he could find,
Skinner going big at everything and Bobby Baily
turning up just in time to run away with the best
trick prize for a clearance 5.0, 180 out.

Trick prizes went out to Skinner, Ferg, Blair and
other well deserved guys who battered it out all day –
there’s only so much I could take in and to be honest
I was creamed just watching five ours of this never
mind skating it.

A proddie toss at the end saw some well mannered
deck-wrestling in the bowl (big up for Ali who after
winning one chucked it back in).

Eventually I headed off home thouroughly aghast at the
jam and equally frustrated at not being able to skate
due to my ageing joints seizing at Epic last week.

If you’ve got a 2006 diary get it ready for next
year’s jam as on the strength of this and last years
event you’d be totally insane not to get there! If you can’t do Perth get yourself
a copy of he excellent Concrete’ly Content dvd and sit back and
enjoy.

Once again big props to Glen Wood for setting it up,
Focus and Black Mark skate stores and Kingpin magazine
and the burger guy for sorting out the prod and to you
if you turned up to skate or watch.

Get Up, Get Out and Get It On – support grass roots skating.