I undertook a brief jaunt to this most northerly bit’o Scotland at Easter, and was expecting some vague notion of skateboarding up there… but saw not a single person who even vaguely looked the part. I was hoping for at least the sight of a dilapidated mini-ramp outside a windswept community centre, but it was not to be.

There are plenty of freshly tarmac-ed long winding hilly roads to trundle down. Unfortunately it was far too wet, windy and miserable to attempt to ride any of them during the duration of my visit. Also, the traffic, although relatively infrequent, moves at quite a speed along the otherwise quiet byways. The cars are usually large 4×4 type things, the drivers of which would probably not even feel by soft ‘southern’ body beneath the wheels, nor bother to stop and wipe my spattered gore off the paintwork as they cruise along at light-speed screaming Nordic epithets about fish and sheep and oil into their mobiles. (Witnessed; although I don’t actually know what subject they were shouting about)

Yes, sadly, I can say from first-hand experience; Shetland’s roads are infested with boy-racers and grumpy looking people in off-road vehicles who don’t take kindly to those travelling at less than 20-30 mph over the national speed limit, and the … but thankfully not as much as the A9.

The people are otherwise friendly though, don’t get me wrong.

As for Skate spots, I actually found a couple.

Down at the harbour they have built a wonderful new museum and archive which is definitely worth a visit. And also this car park with funky level changes, VERY skateable curbs, low ledges and a cool sloping thing wot look ed good for creative trickery.

The day I visited it was blowing a gale and the car was go covered in sea water from waves crashing against the seawall. The locals swear the extreme wind was unusual, honest. 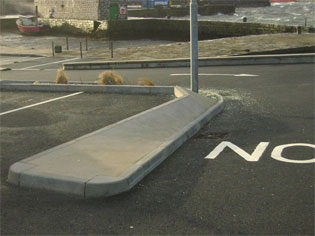 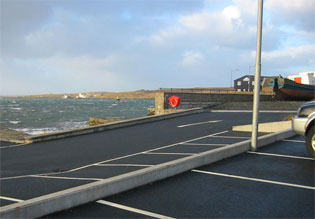 If this place was anywhere else it would be heavily sessioned daily. I mean can’t you just see the nose-grinds down that white sloping ledge thing?

Also, while driving randomly around the main island e came across this beautiful banked wall… oddly enough in a village called ‘Walls.’ 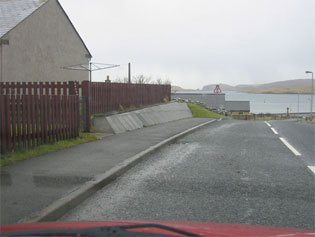 But of course it was too wet to skate, and there was an angry driver behind us so we couldn’t stop easily anyway without getting a Landcruiser up the rear.

Apart from visiting these two marvellous and picturesque villages, one of which is named so endearingly: 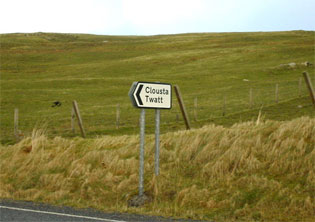 I am sure there must be several hidden skate-gems up there, but they will probably remain undiscovered by me. Why not go up this summer and find them for yourself? I can recommend a good chippy near the ferry terminal, and the locally brewed beer is great! It never gets dark in summer and there MUST be some full-pipes somewhere over near the Sullem Voe oil-terminal…