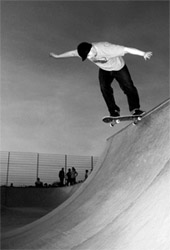 Q: So Popey, tell us about yirsell, where u from, when u start skating?

A: Well let’s see im Popé I’m from the DEE (Dundee). I started skating around 1984-5. I got a little blue plastic banana board from a friend who wasn’t using it. Then i met my Dad for the first time, who then offered to buy me a present as you do, I said a skateboard please. So he took me to the ferry to a sports store that had boards for sale. It was a Vulcan Valterra, huge yellow coke cans and tiny black trucks, flat pointy nose and a very mellow kick tail. I still have the board, although the picture of a dragon on the bottom is looking well used.

Q: What got you into this whole skating madness?

A: I think I was really hooked when I got my first second hand pro board. A Schmitt Stix I bought for £10, which was a lot of money to me back then. It opened my eyes to how big skating was, how big the scene was, how important the pros were, the size of the whole thing. I went skating nuts, living on my board, trading/buying anything people had in my area for skate stuff. I then went looking for skateboarding shops, which then lead me to illegal empty warehouses (The Factory) where ramps had been built, by my peers.

That’s when I started trying to skate properly, watching others do tricks and I tried to emulate. Watching all the Clan (Dundee skate shop) riders/owners and locals skate so hard and tear it up, showed me how it was supposed to be done. Colin Paton, Raffy, Mental, Smod, Nipper – these are names that stood out for me back then for various reasons. I started going there as often as I could, even when it changed location within the warehouse from one end to the other. That’s when the big ramp complex was built, a big comp was held, which Rocker came and skated at. But over time it closed, but the same determined skaters looked elsewhere for another warehouse, then the Perth Road Factory was born, which then lead to Hawkhill skate area, then to the Legal skatepark in Blinshall Street.

Q: U left Scotland about 5 years ago, how was moving abroad? What do you miss from back hame?

A: Yeah 5 years ago I left for job reasons. I finished Uni, took a year out and then was offered a job in Belfast (not exactly abroad!?) as an ICT Specialist, working in Stormont Parliment. I took it as there wasn’t that many jobs knocking down my door. I miss my skate mates, and the scene that we had in the Dee. I come back annually now and I hear stories of how the scene has died a bit, amongst friends I used to skate with. Part of getting older and side tracked with other things in life I guess.

Q: How do the skatespots compare over there to back hame?

A: Well Dundee does have some good spots, but most of the skating in dundee has always been transition based. Not that many great street skaters have come from the Dee. Where as in Belfast, street skating is all they know. But in comparison they are much the same, most cities have spots, banks, stairs, rails, the only thing I would say is Belfast streets spots are relatively close together, so moving to a new location after a bust isn’t too much hassle.

Q: What’s the one spot/park u miss the most?

A: There is one thing I do miss, and that’s the Gate Fellowship Blinshall Street skatepark halfpipe. It was the re-skinned Kirkton community centre ramp from years ago that was kept in storage. I lived on that ramp, loved it. Had some rad sessions on that thing.

Q: What skaters coming out of N. Ireland should we watch out for, who’s rippin it?

A: Belfast has some great street skaters Bernard Rae, Conuhuir Lynn, and a whole host of others making a name. Dennis Lynn (Conhuirs younger bro) ripper, Marc Beggan, Paddy Lynn (no relation), Ollie O’hanlon, Joe Hill. But there’s also some real good skaters from the south of Ireland too that need mentioned, Gav Coughlan, Keith Walsh, Dion McGarrity. Shakers and movers for sure.

Q: If you could have a skate sess wi any dead or alive skater who would it be?

A: Oh, hard question, Penny? Daewon? Hosoi? but I think I would choose, Danny Way, that guy has done it all, from one of my fav videos Plan B questionable right up to Monster Ramp jumping, just a true talented gnarler in the purest form.

Q: How do you like to start the mornings? (u a fry up man or pigging out on salads, or u like me, wake up late, quick coffee and fag)

Q: What’s the best tunes to listen to while skating?

A: In a normal session I like hip-hop, AC-DC, but if its competition/jam time I like fast metal, or drum and bass.

Q: U recently got a nasty injury, tell us about it?

A: I have had a dodgy knee injury for a long time, 8 years or so, had physio which helped a lot, but it’s on the decline again, so I need to get back in the exercises that I was taught to keep it strong. But sometimes you just land on it funny and it speeds up the decline, damn that shit hurts. 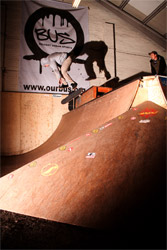 Q: What’s the craziest experience you’ve had when skating?

A: Aw man there has been many, many stories – trying to pick one is hard. Getting ripped off in a seedy bar in Frankfurt on skate tour. Using my car like a scootex on the way back from livi. But one that sticks out is trashing my car right outside the local skater pub. This car had served the skaters proud, taking them everywhere, but the MOT and TAX and Insurance were all up the same weekend. The front pipe had broken and was going to cost more to fix that the car was worth. Closing time came on saturday night and outside the pub 6 of the skaters myself included, skated and kicked the crap outta my car in front of everyone. People were freaking out saying "Whose car is this? thats wrong!" "I was like I don’t know whose it is, but it’s getting it!" – drops off the roof, noseslides on the sills, ollie axles onto the bonnet, it got trashed/sessioned proper – it got towed away the next day, so funny, such a laugh when yer pished.

Q: Whos the most under-rated skater u know?

A: Well not sure about under-rated as though who know, know he’s always ripped. But as for sponsors and coverage "Slobs" from Perth. Everyone in the area knows he rips but nationally he’s never had a proper spot light on him. From the times back in the early 90’s he has ripped. Should have got way more coverage, and footage – the world has missed out.

Q: What are you up to these days?

A: These days I’m involved with a charity I help set up called B.U.S (Belfast Urban Sports). We have setup an indoor park in Belfast Called Unit13. I helped set this up as there was no indoor places left to go in a country that has a lot of precipitation. We have been open a year and it’s great to have somewhere to skate. I have also been involved in the procurement of an outdoor concrete facility for everyone, in the city centre of Belfast. Which has been successful and the 2.5 years of hard work has paid off with a £500,000 budget for a park. Which should be open next may. I’m also NI rep for UKSA.