Another year at Falkirk skatepark for the annual Killin the Kirk skate jam, it was a good turn out and big props to everyone who came along and made the day a success and got a good schralp in.

The day started as ever on the mini ramp with skate jam madness and the usual texas deathmatch scenario to keep it exciting, highlights here were again Mark Burrows who ups everybodies ante when he’s on the sesh, good work Mark, Paul Clover, Aaron Wilmot, Rory Posh-surname-ponsonbysmithe the 3rd, Ryan from flk and young Aiden from fife.

This then migrated onto the hip where again the session got heated with Burrows, Isaac, Martin, Rory, Paul C and young Aiden all putting in a hefty sesh across the hip and the rail which was placed across it.

Then it was onto the large quarterpipe at the back o the park for the heavy hitting sesh, it got a bit more interesting here with Cannibal Col going huge on lien airs, Rory getting inverted, Aaron doing all manner of backside tailslides/crailsides and a bs blunt disater, Isaac boosting melons, Paul C getting tech with many bs flip combos and a backside flip melon, it was at this point that the rain stoppped all shredding for a bit when it downpoured. This was shortlived and it dried up much to our joy and the sesh continued.

We then moved onto the large ledges (that hardly get hit) at the big flatbanks to see teabag turn upon his bike after cycling 22miles to get a shred on, good effort from the coping commander that is the Bag, he proceeded to hit the ledgewith a 50-50 1st go, this was followed by a 50-50 then 5-0 by gusho and I’m sure Blair hit it up as well.

There was a short driveway sesh which Blair and Isaac hammered away at tre flips and then it was time for the product toss.

Lots of folk went away with skate product some a better fit than others!! and happy faces & as it was time for me to get a sesh on it downpoured again, ahhhhhrrrgggg….

Another good day, good year for Killin the Kirk, see you all next year for the same. 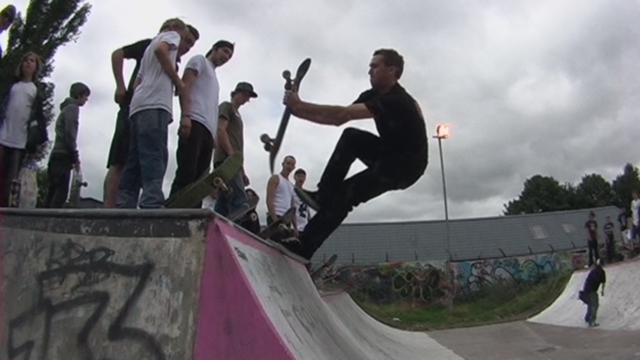