War of the Thistles has now become the start of the main comp season in the UK with folk travelling from all over the country to try and win some fine prizes. This year was no exception and the event was once again organised by Skateboard Scotland and was proudly sponsored by the following fine folk:

Major props go out to these companies for agreeing to support the event and allowing it to happen. Thanks again.

As usual the weather for the Thistles weekend seems to be pretty much always beautiful. Sods law = when you have organised an indoor event it is always nice weather outside. Anyway that did not stop the masses forgetting about the Royal wedding and getting to Dumbarton’s Unit 23 Skatepark for day one. As always this event is generally best viewed by getting along and getting involved or just watching, however thanks to Sidewalk Magazine you can watch the edits of both days. Here are Skateboard Scotland’s brief run down of what went down over the weekend:

As always we started off with giving the young up and comers an opportunity to win some of the fine product provided by our sponsors. The kids were amped the prizes were flung out of the product box in the newly re vamped street area in Hall 2. Highlights for me were the dude with the real big backside 180 flip out of the driveway and the Aberdeen lads throwing themselves about the place. The rest of the product was dished out to the kids killing it in the wee bowl. Kieran Menzies destroyed it with a massive backside grab over the gap and large tail grab over the new hip. The hip seemed to be feeding the locals imagination as there were all manner of massive grabs getting pulled over it including the most tweaked grab that I have ever seen by some young ripper that managed to win himself a new board. Check the photos to see what I mean.

Next up we moved onto the sponsored street for cash. Jirka Bulin (AKA George) was killing it in the street section on the newly built block. Bluntsides a plenty and a nollie flip crook was also nailed. He looked well stoked to be able to win back some money to pay back Tez. Silvester was also representing Skateboard Scotland well by getting well tech in Hall 2 showing us that he has still got it. Martin made some of the maddest tricks on the pole jam that I have ever seen including a rock fakie and a blunt pull back.

The wee bowl was the next spot of choice for the sponsored riders to win cash prizes. Manhead’s kickflip over the hip was text book although proberly only as textbook as the 15 ollie to blunt frontside 180 back in which he made everytime in the run up to nailing the kickflip. it is quite scary how consistent he is. Martin was flying at mach 10 and doing 10 foot long K grinds as well and skating all the new aspects of the re-furbished bowl. Stu Graham was going Big over everything and even cleared the platform after a few attempts.

We decided that the best trick over the newly created gap would deserve a 50 quid prize. A few keen folk had a go. Paris nailed his custom stale fish right over the gap, Stu got over it on a big frontside carve and a 360, but  Benson took the cash by doing a alley oop the hardway. Check how sick it was in the footage.

As usual the final part of Dumbarton finished off in the big bowl. Rob Smith kindly came all the way up from Manchester for the day so that he could bring back the trophy from the year before and also pull a few nice sal flips over the hips in Dumbarton. What a good lad.  Everyone was going big in the bowl but stu seemed to manage to get everything a bit higher than everyone else. His bigspin up real high on the vert wall in the big bowl sent the crowd nuts. Once all the money was gone The schralpher award was given to Martin Mcguire for his fine efforts all round on the day. Well done Martin. Check out the footage for the highlights below:

As we all know a skate event in the UK would not be the same unless Felix makes an epic journey to it. Once again he made it and we were stoked as ever that he did.

The young ones were given the opportunity to win product on the street section and the half-pipe. The battle commenced and the kids were dieing to impress the judges and get some proddie. Chris Nufo pulled a hardflip over the hip and earned himself the creature hoody that he had been eyeing up in the car on the way to the event. Lots of great skating went down in the half pipe and loads of kids picked up new boards. After that we gave the rest of the kids an opportunity to fight for a board if they hadn’t won one earlier. The battle lasted for a wee while with 1 stoked kid eventually coming away with a new stick.

Next up we started the sponsored street section off. Korahn was on it and made a kickflip backside 5-0 and  backside tailslide down the hubba. Dennis Lynn and Jirka were also fleecing the prize fund by going big and tech. Manhead destroyed the street section with ease with a bluntside down the hubba and then he shut it down properly with a perfect tre flip over the big fun box.

Following suit with the unsponsored riders we moved the sponsored riders onto the half pipe. Colin Adam pulled all sorts of Judos and madonnas in the halfpipe. Stu Graham was going real big in the halfpipe and made a lovely frontside air round the corner of the oververt pocket. Manhead as usual looked like he was putting no effort into skating the halfpipe. I don’t know how he does it but he is so consistent it makes me sick. His feeble to fakie on the oververt corner earned him one of the best tricks of the day in the miniramp.

On Dennis Lynn’s first visit to the Thistles he managed to show us that he not only has some lovely street skills but he can also hold his own on the trannies too by pulling some nice runs in the halfpipe.

Finally the session that we had all been waiting for started and we hit up the big bowl. If you have never skated the bowl in Aberdeen you need to make a concerted effort to get there and have a session. It is rad and should not be missed. Colin Adam was going off and managed a lovely nosepick on the newly added diving board. Best tricks in the bowl where Andy Scott’s invert on the diving board and T-bag’s ollie over the diving board to disaster which were nicely finished off Eddie Belvedere managing to ollie over the diving board into the bowl for the crowd. A very nice way to finish off the event for another year.

All that was left to do was to hand the second half of the trophy to Manhead for his fine efforts on the day and get to the pub for about the most bizarre pub evening out in Aberdeen I reckon. There were a few firsts on the night out including a MC who had to read his own lyrics, a Jester chasing folk around the bar and Felix playing a set with a bunch of randoms. Fun times! See you all next year.

In case you never made it here is the Aberdeen footage: 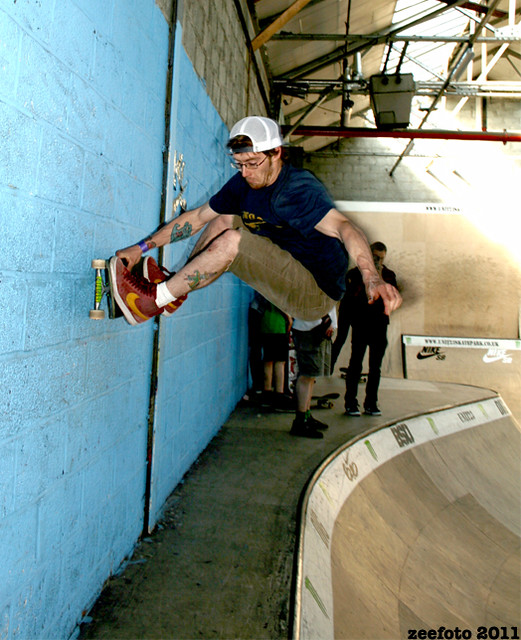