Barcelona Extreme will be back on June 6th and 7th in Parc del Fòrum
Barcelona will be the extreme sports capital on June 6th and 7th when the
second edition of Barcelona Extreme Sports Festival will take place
40.000 spectators gathered in the first edition of the festival, an
unprecedented success in Spain in an urban sports events
Parc del Fòrum will hold Skateboard, BMX, Inline, FMX, Wakeboard, Ski and
Snowboard international competitions again.

Barcelona will become the extreme sports capital again in 2009 when the
second edition of Barcelona Extreme Sports Festival will take place. The
event will be celebrated on June 6th and 7th in Parc del Fòrum, the same
venue that held the first edition of this urban sports festival last
October.

The first edition of the festival had an unprecedented success in
Spain regarding spectators and participation, when 40.000 spectators watched
the spectacle offered by the main national and international riders live. In
its first year, the festival, promoted by Ajuntament de Barcelona and
Institut Barcelona Esports, has become the first big urban sports event in
the country and the second at European level.

The second edition of Barcelona Extreme Sports Festival will gather the best
experts in Skateboard, Bike Freestyle (BMX), Inline, Motocross Freestyle
(FMX), Wakeboard, Ski-Snowboard (jibbing modality) and Longboard and it will
bring many novelties and surprises. The event keeps it philosophy of
combining pro and amateurs competition and open facilities for the practice
of this sports. 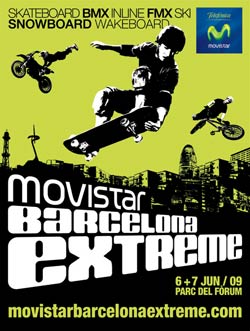