Once upon a time, far away from the glitz of the
x-games, the unknown soldiers of scottish
skateboarding pitched a battle in the land of
Dundee. Those who dared entered were numbered and
their fate sealed. 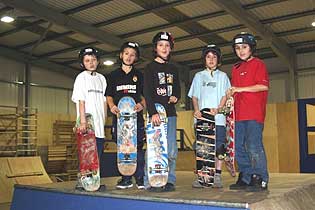 Unknown to anyone except the
upper echelons of the Skateboard Scotland Clan, we
struggled to secure the "voice of god" i.e.; the PA
system. Fortunately a megaphone was acquired and
ears began to bleed as high pitched shrills informed
those brave enough that the battle was soon to
start.

First up was the young guns who shredded the
street course so hard it had grans swearing. Young
Matt threw down hammers at every opportunity
including clean lines and a b/s 50/50 along and down
the grind box, It was obvious he was taking no
prisoners. The counter attack from Lee "hard knox"
consisted of lines worthy of a cruise missile ending
with a floaty ollie across the funbox landing with
the force of 2 megatons. When the dust settled the
judges concluded that it had been Matt Welsh who
deserved first place, Lee Knox an honorable second
and Stuart Gray survived to clutch third place. 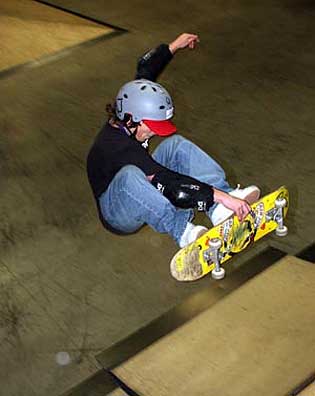 Next
up was the over 13’s who wasted no time stamping
their authority on the street course, local ripper
ross melon’ed the bmx jump with confidence and
flair. Scott from kdy nailed a b/s 180 over the
funbox then came straight back to f/s 360 over the
hip of the box. Graham from dunfermline was
witnessed trying to flip the funbox, well over the
national speed limit, then finally nailing one out
after taking one hell of a beating. 10 out of 10 for
effort!! The onslaught of tricks continued with
Husayn letting rip the afterburners as he put top
gun to shame, fast fluid lines and a couple of airs
chucked in, ice man aint got nothing on this guy.

The judges were having a hard job as the tricks
poured out over the course. Scott was trying in vain
to land an ally-op f/s 360 indy from the 8ft quarter
into the 6ft, after some encouragement from the
rowdy crowd he stuck it clean and made the judges
final decision a little easier. For his valiant
effort Husayn Smart was awarded 3rd place, as for
first and second the judges had to hold a secret
conclave to decide the outcome, Scott Ramsay had
earned 1st place and right on his tail was Ross
Matthew with a well-deserved 2nd. 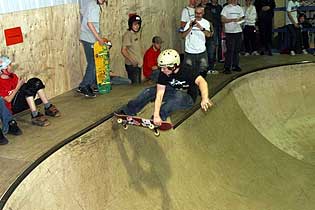 Now it was down to
the veterans to steal the show, although there was
only 4 competitors they had the strength of a
thousand grizzly bears. Skinner, fueled on highly
explosive alcohol, threw himself around without a
care trying to nail a flip to b/s tail on the 8ft
quarter, once again 10/10 for effort mate. Josh
soared past the heavens when he blasted a HUUGE b/s
melon on the vert quarter, Danny Way watch out! Russ
demonstrated his old skool skills with some bad ass
boneless’s and Ali knocked out some tech bangers on
the funbox. Josh Ralph captured 1st place with his
fluid style and lines, Russel Anderson captured 2nd
place followed by Ali McKintosh snatching 3rd.

The
street course was left in ruins and the battling
hoard of steel knuckled skaters turned their
attention to the bowl. The format was simple yet
deadly, two 8 min heats, one for the groms (under
14’s) and one for the rookies (over 14’s). Benson
from livi was like a spitfire as he flew round the
bowl and hammered out a b/s disaster revert on the
extension. James showed that he wasn’t put off by
bens skills as he dropped in and nailed a stylin
stalefish over the hip. In my opinion the unknown
tiny wee guy stole the show when he dropped in the
bowl which was twice the height of the little chap,
no fear and not even old enough to drink beer,
anybody who knows this little guy’s name send us an
email so we can give credit where it’s due.

Jordan
set the copings on fire with smooth 50/50’s round
the corners and Adam laid down a run which won him
2nd place in the under 14’s. To seal the deal benson
landed a lein out of the bowl to tail on the
extension which left the bowl in tatters and
vanquished his fellow skaters to take 1st place in
the over 14’s. James Symonton stayed in the game to
take 2nd in the over 14’s, Jordan Coleman took 1st
in the under 14’s closely followed by Adam McNally
scooping up 2nd.

With the bowl and street destroyed
the remaining forces targeted the spine ramp. Ross
seemed to be running on duracells when he wasted no
time claiming the gap from the half-pipe into the
spine as his own, smooth melon landing with plenty
of speed to melon the spine as well. Blonde scott
used his hyper-activity to his advantage as he blitz
the spine with lengthy b/s 50/50’s then took some
hits attempting flips into 50/50’s where as the
other scott landed some kind of f/s smith transfer
over the spine. Lee took some "knox" (sorry mate)
but like Steven Segal he just got back up and kicked
ass, minus the ponytail. 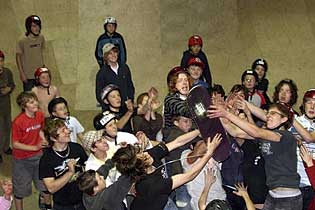 The
madness didn’t end there, the most bloody of battles
was yet to begin, the product toss. As sweat ridden
warriors of all ages and sizes assembled in the
bowl, free boards, t-shirts and stickers rained from
the sky. The once calm crowd erupted into a sea of
pushing and hair pulling, I was disgusted to see the
wee guy who earlier ruled the bowl being pushed to
the flat and robbed of the board he had just managed
to grasp. The crowd took no time making everything
disappear – as quickly as it started, it was over.

I looked out at the sea of numbered helmets,
smiles, frowns and tired yet content faces and
thought "at last – I can get a skate now".

A big thank you is due to the sponsors of this
event (Focus, Four
Down, Kaos, DB Boardstore, Black
Mark, Boardwise and Medic Skateboards)
for supplying a dose of prizes and of course the brave men of Skateboard Scotland
for taking on the challenge. I would also like to personally thank
everyone that turned up and skated, you are
skateboarding in Scotland and without you, none of
this would have happened. Well done chaps!! Same
again next year???