When you walk into a shop and Stew Rattray, sporting his new ‘Obi-Wan’ beard,
thrusts a beer into your hand, you know you’re in for a good night. 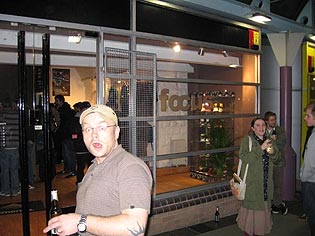 Sibs contemplating what he’s gotten himself into

This is a Scottish Skateboarding success story for one of the most recognised
brands on our scene. This night was the official opening party for the Glasgow
branch of Focus. For those not in the know (shame on you, first of all) Focus
has been trading and supporting Scottish skateboarding under the ownership
of Stew Rattray and Sibs since March 2001. Up until Monday the 12th of December,
they have been solely based in Edinburgh but have now made the step across
to the west-side under the management and part ownership of the skating pedigree
that is Marc Foster. 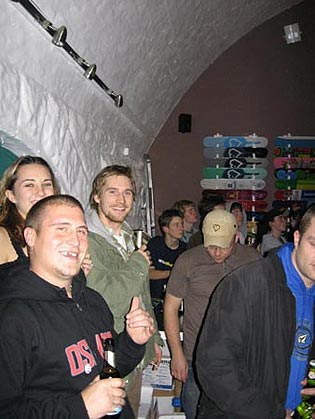 The opening night itself was laden with what can only be described as Scottish
Skate Regality. In attendance were Sires Colin and Div Adam, Duke Graham, Lord
Kennedy and Focus’ newest team member, his royal radness John Rattray
amongst many others. 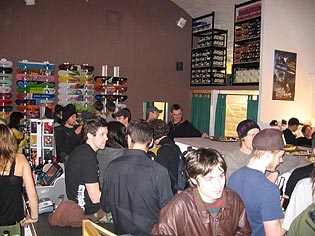 Overview from the door over to the deck wall

Aside from the allure of free beverages and canapés we were treated
to a few video premieres including “Once Upon a Time” by The Harmony
and to get all François on you, a coupé de Cliché by showing
what was probably the world premiere of their new video “Hello JoJo” video.

The shop itself is in keeping with the high standards you come to expect at
Focus. The white bricked arch ceiling provided the projection canvas for the
videos and although they haven’t got the space for the mini ramp…..
stop the press….. they have got the metal curb 5 yards from their door
in the off-street plaza section where they are situated. 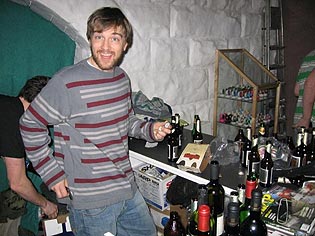 All in all, to quote Sibs, “a banger of a night” and the start
of even more success for one of Scottish skateboarding and Skateboard Scotland’s
biggest supporters and benefactors.