Saturday the 15th of October started the same as any skate trip where
you have to try to get the minibus organised to take a crew of
skaters around the country. The rental company messed me about for
about an hour or so! Fortunately I kind of knew that everyone (3
minibuses full) would not be organised to leave at 9.30 am as they
were meant to. I managed to get the minibus there just in time to
saddle up and hit the road.

We left Focus at about 11 am and made our way towards Bolton. Not too
many stops were made as there was not as much drinking going on as
there was on the last Bolton trip. We arrived at about half three and
the park was already rammed full. Most of the Blueprint team was there
and were killing the park. We had brought a decent selection of
Scottish skaters with us too. We had Div and Colin Adams, Blair
Mcafferty, Benson and a whole load of other decent Scottish fellows.
There was a lot of real good skating going on, not to mention a lot
of filming and photos getting taken. Not much filming done by Glen
though as he got gished and crashed out on the secret couch in the
park with 1 set of van keys in his pocket.

The comps kicked off in the evening. There were various comps going
on throughout the evening. There was the mini-ramp comp, big vert
wall, and hubba ledge comps. They had sponsored and un-sponsored
versions of these comps. The un-sponsored winners got product and the
sponsored riders went away with big cash prizes. Well organised the
UKSA! I can’t really remember who won what exactly as everyone had
consumed a few beers at this stage and I was trying to get a wee
skate on as well. I will run through some of the highlights for me.
Andy Scott and Ben grove were killing the Mini-ramp. Andy’s Kickflip
Melon fakie was the sickest I have seen. Div’s big 360 nosegrab over
the big fun box was healthy. He also made a frontside nosepick on the
big vert wall which earned him 100 bucks for the best trick. Scott
Palmer’s backside chink chink (Backside 180 fakie nose grind for the
younger generation out there) down the Hubba was amazing too. Danny
Brady was throwing down some real nice flip tricks including a
backside 360 double flip with style. It was real good to see the
Blueprint team skating the whole time and not really having any rest
breaks. Proper professionals. The comps were good to watch and also
allowed other folk to skate the rest of the park too. 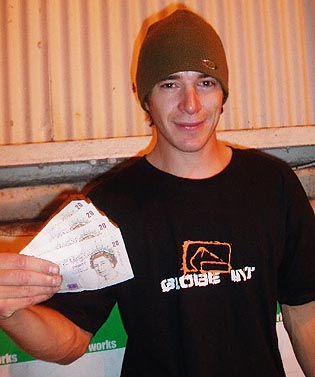 Most people left the park about 8pm so that Tez and Co. could clean up
for the alleged SLEEP over. I can tell you now that not many folk got
much sleep. I tried to crash out at about 3am on top of the big
quarter beside the vert wall only to be kept up by the flat spots
from Livingston. I would have crashed in the van but my son Kieran was
insistent that we had to stay in the Park. Next morning at 7am I got
the early morning wake up call from Benson and Kieran as they tried
to pull me down the quarter where I was resting my weary head.
Fortunately my duffs were near by and these put the challengers off
their quest. Kieran decided to ignore his Dad’s suggestion that going
to sleep would be a good idea as we were going to be hitting the
works the next day. He stayed up all night with the Livi/Carluke boys
and was a zombie in the morning.

The morning after was a bit rough for everyone. A bit sore and a bit
stiff. Almost the whole Scottish contingent hit the wee café on the
corner for Breakfast. AKA a bacon barm (apparently what you call a
bap/roll in the North of England). I was a bit confused when I asked
for 3 bacon rolls and got 3 barms. The Café lady has not expecting us
and therefore the service was a wee bit on the slow side. But the
food was dope once we got it.

We left for Leeds at about 11am. We managed to find ourselves 2 boys
from Leeds that were wanting a lift through to the Park and home that
day. We kindly obliged in the vain hope that we might not get lost
trying to find the park in Leeds. Big Mistake. My bus (last in the
convoy) got cut off from the rest to the buses with the Leeds boys.
We were struggling to find the place and went round in circles quite
a bit. Fortunately we bumped into a blader in the street and he gave
us vague directions. It never seems to matter how many folk you have
on board who have been to the park before. You still end getting
lost. I thought that we were never going to find the place in amongst
all the industrial estates. Then we spotted what looked like a mother
taking her kids to the park and luckily it was. We actually didn’t
take much longer than the other 2 buses to get there (and they had
the leeds boys). 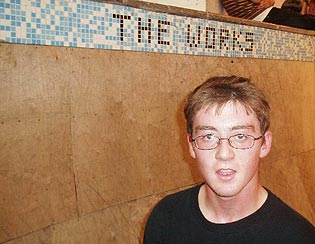 The Sunday at The Works ended up being a more chilled day than the
first day as everyone was kind of burned out. Apart from div who
tried to frontside blunt this ridiculous pooled vert corner to the
delight of the crowd for about an hour (although it was only meant to
be 10 minutes) He got 50 quid for his troubles and a battered body to
boot. Good viewing though. Andy Scott was killing the funny pooled
corner too with blunts and backside smiths. This was the only part of
the comp that I actually watched as I was enjoying skating the park.
The mini-ramp was real nice (and quite quiet compared to the rest of
the park) and the street section is amazing. Not sure who won what
on the day as we tried to leave at about 5 pm to get back up the road
and missed most of the comps. The park was rad and I will definitely
be going back.
We left the Works at bout 6pm and headed north dragging our weary
tails behind us.
Next stop Burger King on the motorway and on to Scotland.

We got back to Edinburgh at about 11pm which was nice. Stewart
Rattary did not get back til 12 after dropping folk off at Livi who
then went for a skate at the park (nutters). I went to my bed and
headed to work the next day for 7am. Nightmare.

Big thanks go out to Sibs and Stewart at Focus for
organising the trip. It was dope – cheers. Congrats to UKSA for organising
a great weekend of skating. Well done to Stew and Sprocket for joining me for
the minibus driving experience. Sorry to the Dundee lot who missed
their train due to the late arrival home on the bus (heard you guys
managed to blag a lift though). No thanks to Arnold Clark for renting
me a van with a broken tape deck. See you all next time.