Saturday 11th Feb 6.30am I walked my way to the backstage entrance of the Rod Laver Arena in Melbourne, passing over 200 kids on the way who had already begun to wait for the 9am doors opening. As to which I grabbed 3 massive bundles of Global Assault stickers and went outside and threw them into the air above the hoards, as you can imagine it was followed by carnage as kids wrestled each other for them.

Still trying to get my head around the fact that I landed the dream job of organising the biggest skateboarding event in Australia and possibly the world, I started to put the final stickers on the street course while dodging Koston, Sheckler and the crew practising on the course. I then bumped into the Sidewalk crew and could not believe it, last time we met was in Aberdeen at Ethos and to bump into each other on the other side of the world was a bit surreal. 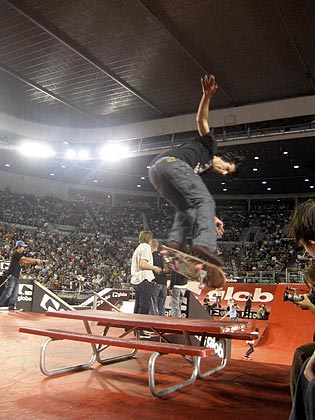 9.00am saw the doors open and the action started, over 16,000 spectators in all witnessed some of the most gnarly tricks, Sheckler kick flipped his way to the $30,000 first prize and was followed up by the amazing 11yr old sensation Nygah Huston, who carried away $15,000.

The event was brimming with excellence from Chris Cole & Eric Koston, who during a late night drinking session on the Friday admitted to me and a group of friends that they were gunning for 1st place and where ready to lay it all on the line in the Final. Sadly it was not meant to be though but they both got over it pretty quickly at the Slam after show party which saw Jake Duncombe honoured by Slam Magazine as their skater of the year. 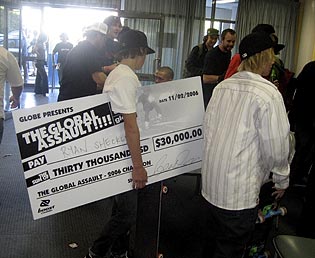 The Global Assault bore witness to one of the most amazing finals with Sheckler, Nyjah Huston, Eric Koston, Chris Cole, Ronnie Craeger battling it out for honours. Also for the very first time in a major event a girl, Elissa Steamer joined the battle and tried to steal the honours from under the guys noses.

After the weekend’s events The Global Assault has well and truly established itself as the biggest Skateboarding event in the world and an event that all the Pro’s enjoy and will continue to return to year after year.