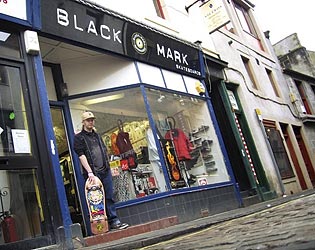 Does anyone remember the first Harry Potter Film? When Harry is first introduced to Diagon Alley. I’m always reminded of that scene when walking up Bruce Street in Dunfermline, the home of Black Mark Skateboards. A thin, easily crowded one lane cobbled street with hanging signs and obscure windows you can’t quite see into. About halfway up the street you start to hear a rumble which gets steadily stronger the more you push forward until you realize the owner of Black Mark, self-confessed mosher and Jason Newstead circa 1992 haircut-a-like has turned his Slayer records up again.

So who is Black Mark? What greets you as you enter his den of skateability? Well, Mr Golder lives skateboarding and to quote him…..Sorry can’t use that quote as it has too many ****s in it, but trust me, he likes it a lot. So much so in fact that in October of 2003 he decided to throw in the towel with a corporate communication giant to take his obsession to the next level. Seeing a gap in the market in his hometown of Dunfermline, he decided to take the plunge into the wonderful waters of skate retail. Citing Fife as having a really solid skate scene with some really good skaters and pints being cheaper, Mark saw this as a win win situation and proceeded forthwith. 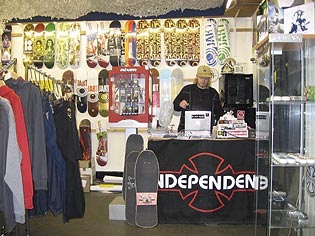 Monday…..10am…. A fresh new week in the Dunfermline skate commerce sector of which Black Mark Skateboards holds crown. As he unlocks the door, Black Mark walks into his favourite thing about owning a skateshop. He is now immersed fully in the rippling waters of the British skate industry. Brushing away his distant imaginary piles of money, which turn out to be the stoor of a previous weeks trading, is where work begins. Far from being able to sit around talking skating and watching videos, there’s a lot of not so skating jobs to be done, wading through the swamp like bureaucracy of what a self employed person knows as the tax return, making sure all the postal orders are sent out and everyday tasks that are associated with the running of any shop. Banking, sorting stock and dealing with the distributors, reminding them that it’s his business and his choices.

Overall, he may never accumulate Bill Gates style wealth but running Black Mark Skateboards has allowed its owner to indulge his passion day to day and has allowed him to contribute a little to our scene and help others out.