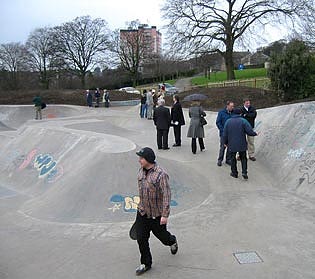 On a scenic hill overlooking the city, in a bright-grey afternoon of bitter cold with spells of icy rain, the assembled suits and creative surgeons shuffled curiously round the hardened bumps and transitions like so many penguins on an ice floe. By contrast, the other figures; with wheels, shot like diving skuas around the slower shuffling interlopers on their crisp new territory, occasionally stopping to watch the procession, before rolling on to discovering new trajectories.

Slippery red ribbon severed, photo taken, cries of parentally bureaucratic joy. Heralded with neither cannon-fire (it was an Olympus I think) nor pealing of bells. The squalling infant was finally technically released from the amniotic waters of the council procedural body, and into the ragged, coarser air of the public realm. This was a purely symbolic act, and one that seemingly in denial of the fact the kid was already wearing a leather jacket and talking about trying to sneak into Uncle John and Whitelock gigs.

Before the construction company Clachan had even left the site, the accelerated growth of the body of people who could say “I’ve skated that,” was so phenomenal that scientists from a local research institute are arriving in big white full body-suits and breathing apparatus. They are taking samples and trying to extract the essence of the park for use in their animal breeding experiments.

Bacteria of course multiply on any exposed moist surface, and sometimes turn nasty. This child was no exception, as marauding knuckle-draggers have arrived daily; to break things, burn things, throw rocks, constipate the flow of the park, and scrawl incoherently onto it’s admittedly not peach-complexioned skin. The issue is only really starting, yet pointedly raw and starting to fester. It will certainly not kill the park, but the immune system will certainly have to ‘ramp up’ its various antibodies. A large well crafted graph-tattoo might be commissioned to cover the poxy, faecal-like scribbles of the wee idiots.

As for performance on the field; the skateboarding faces that this reporter has seen seem pleased. Although small of girth, the park definitely has a flow and some distinct steez. Some of it’s moves are like butter, and some of it’s like hot chillies. Be careful when playing with it. It can smile and be very generous, but also floor you with one blow like a Chuck Norris in short-trousers. Whether it will have enough talent to turn pro after school is yet to be seen, but there are some promising reports from local and international riders.

Dudhope Park in Dundee is happy after the birth, and resting comfortably.

See all of the shocking inside exclusive pictures of the skatepark and it’s naughty secrets at http://www.dundeeconcrete.com/