Skateboard Scotland organised The War of the Thistles so we could bring something exciting to the Skateboarders of Scotland. We came up with the idea after going down to the War of the Roses event at the end of last year. Anyone that went on that will tell you how good it was. We wanted to get something going on like that in our own back yard. So we did and here’s what went down: 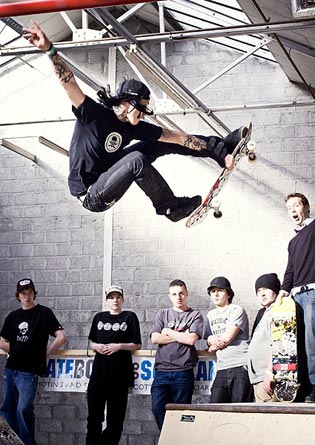 Lee Blackwell – who better to christen a new bowl?

Chick managed to get the brand spanking new bowl finished at half past midnight the night before the event. He said he would have it ready in time and he did. A fine effort indeed as it proved very difficult for me and Bob Sanderson the MC to pull people away from it to get the Flat Bar Jam started up. Eventually it got going and there was some pretty nice trickery going on. Paul Sylvester was killing making a switch Nose Grind and a sick fakie 5-0 which earn him 30 quid. Kyle Cathro won a wee Cliché Hoodie for his backside boardslide to fakie. Adam Stoddart was trying 360 flips to boardslide but it never quite came together. Lots of other prizes were given out to people that were landing tricks on the bar. 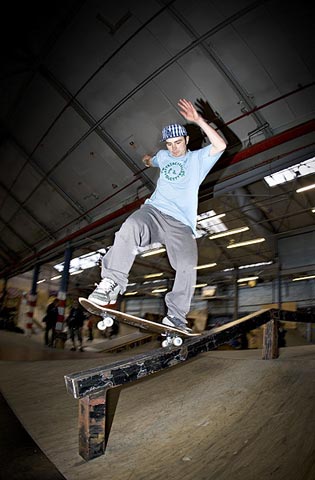 Next up was the pyramid session. Blair Mcafferty made some crazy late flips that blew my mind. Karl Wilson earned himself some cash doing a nice caught frontside flip. The product was getting dished out right left and centre to all the local rippers who had come out to show their steez.

After a brief interlude for some fresh air, liquid refreshment and a listen to some of Seaney B’s Scotland Yard DJs’ beats, it was on to the spine ramp. There was a nice session going on with Blair making a nice 360 varial over the spine. Karl Wilson was doing some real nice backside smiths and backside tailslides that earned him a tenner. There were some nice near misses going on with the jam format which made for good viewing. The only problem with the format is that you don’t have any info on the names (apart from what you can remember from the day) of who did what. One of these mystery men made a real nice lofty frontside flip and earned himself a nice East hoodie. Lee Blackwell also made himself some cash going ridiculously high over the spine. 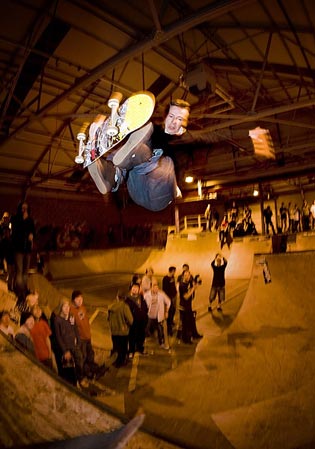 Ben Leyden on the spine ramp

Bob challenged the masses to see if anyone was up for the blader rail for 50 quid. For anyone not in the know this is a ridiculous 40 foot long single rail with not much run up. The only man that seemed up for it was Dan Cates. He tried to Backside Cave man boardslide it. A couple of locals got in on the act and got pretty close at the backside boardslide too. After a while Div fancied his chances too and started to try a frontside caveman 50-50. Dan Cates almost stuck it twice but kept having issues with the waxy landing. After a while it was decided that there was going to be two more tries each. Guess what? On Div’s last try he stuck it good and proper and got himself 50 nicker. No surprises there then. (Click here to see the video evidence.)

Last but not least was the one everyone was waiting for, the bowl Jam. There was 150 quid prize money for the bowl and folk were going for it. Wee Matt Fenton from Glasgow knew what he had to do to win the Blueprint Deck that I had promised him if he nailed the backside flip disaster revert that he was trying on the spine ramp. Within a minute of the Jam starting he had nailed it and got his prize. Rob Smith was doing some nice wall plants and earned himself 20 quid. 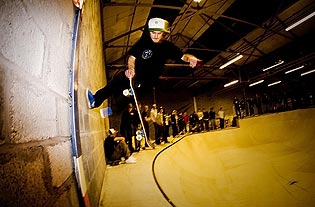 Rob Smith uses the wall to earn himself £20

Colin Adams also used the wall to earn himself a pink one by getting right onto the wall with his board and somehow bringing it back in. Lee Blackwell did a massive frontside mute for which we tried to give him 20 quid for only to be told that ‘No don’t want that, that was meant to be a tuck knee’. He stuck the tuck knee a few minutes later though and got his just reward. Div was killing the bowl at high speed and earned himself some more beer tokens after one of his runs. Wee Benson – the newest member of the Death Flow team – also managed to snag himself 50 quid during the proceedings. Once the prize fund was exhausted it was on to to the massive final product toss in the big vert bowl. Four decks and a whole load of other stuff were tossed into the masses. 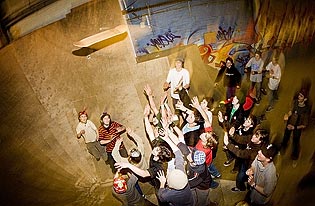 The first of many product tosses

After that it was off home for a much deserved rest before the next day. 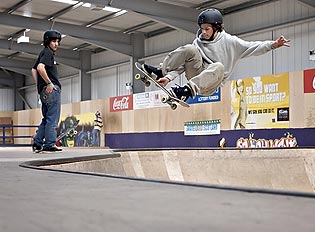 The second leg was run with the same format as the first. This time we started off with the spine ramp, which turned out to be another sick session. Big Mark Burrows was killing the ramp, dodging through all the other competitors like a man possessed. He transferred from the spine into the other mini ramp and generally just stuck most tricks. Needless to say he earned himself some cash. Div Managed to stick a 360 flip disaster on the spine which also earned him some bucks. Wee Ross from Dundee stuck his trade mark backside 360 grab over the spine to the tune of a new deck. Mean Dave also earned himself a new stick by making a flawless run which included a backside crailside and a lovely blunt to fakie. Tez was also showing us his lovely backside smith grinds. 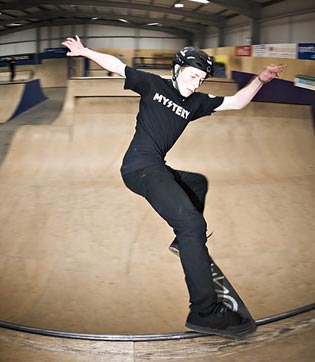 Our very own ‘Mean’ Dave Caldwell

Next up was the street course. Wee Matt earned himself some more prizes by making a crooked grind down the rail. Paul Sylvester got some more cash for clearing the whole fun box and frontside tail sliding the block on a board that had the nose snapped on the attempt before. Div Frontside 5-0’d the big ledge along the far wall and popped into the flat bank. Blackwell and Big Mark made themselves some more cash by going ridiculously high over the big BMX kicker. Bobby Bailey almost made the kickflip transfer over the rail but it was not to be. 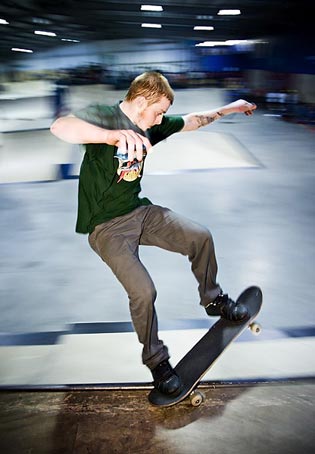 We moved straight onto the wall ride session after the street jam. Big Mark made it first go with a frontside indy wallride. Next up was Rob Smith with some more nice foot plant action. Last but not least was Lee Blackwell who made a backside flip foot plant to get the final 20 pound note.

After a brief interlude for dinner at Yogi’s it was onto the finale. Once again we rounded things off with a bowl jam. Josh ‘asbo’ Parr was doing some lip tricks including nice backside smith reverts. Lee Blackwell was trying to touch the roof and once again earned himself some cash. Mean Dave made his crailslide and blunt again to earn him board number two of the day. Wee Matt Fenton stuck his backside flip disaster revert again and got himself a coupon for some éS’s off Turvey and a brand new third foot board off Bob. Well done Matt. Carl Wilson made a few nice runs too and put himself in the money. Ben Leyden was trying real hard to make a big floaty kickflip to fakie but it never quite came together. Shame as he was so close. 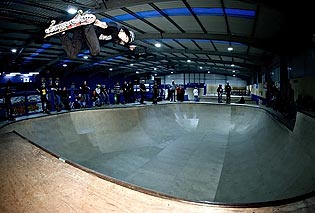 Once it was decided that the English Crew had to leave to meet various deadlines the jam drew to a close and another vast quantity of product was tossed out into the crowd. There was even a fairly long fight for the final deck in the ruckus which Perry won in the end. Good to see folk going for it. Any way this brings me to the end of the write up and on to the most important bit. We need to give a big thank you to all the Sponsors of the event.

The Sponsors for the event were as follows:

The Biggest props have got to the Death, éS, Emerica and Etnies Guys that came all the way up to support the event. We would also like to say thanks to all the travelling skaters from England that made it up for the event. Well represented by the Bolton massive. Hope that your scabs are healing up now scabheid. It was good to see all you guys again. Hopefully we can catch up again sometime. War of the Thistles Part 2 in 2007 maybe??