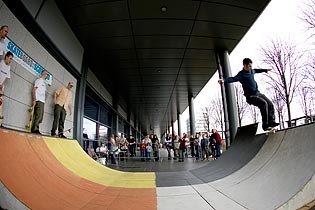 The event was promoted as an opportunity for the public to gather information and potentially watch activities relating to sporting or social activities or organisations.

Without a shadow of a doubt the most interesting display was the one set up by Skateboard Scotland – we built a full 12’x3’x24′ min ramp with a 1′ extension/tombstone and skated it like dafties for two days solid right outside the front door of the mall. 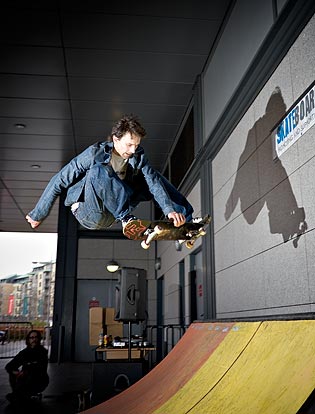 While everyone else stood around inside kitted out in lycra pants and big padded shoulders handing out leaflets or trying to sell £1,000 annual memberships the Skateboard Scotland worthies rocked, rolled, aired, planted, ground and occasionally slammed (that’ll have been my contribution thank you very much) on the ramp outside under the canopy to the enjoyment of everyone entering the mall.

Add to the spectacle the juggernaut PA, big beats and rhymes Seanie Bee and Jinxie brought along, and were amazingly allowed to pound for two days right through the wall from Dorothy Perkins, and we had one great jam. 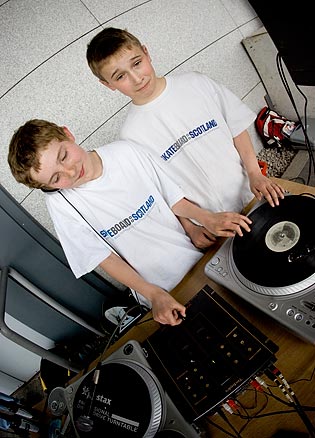 The weather held out too and the sunshine on Leith added to the flow as we were joined by Colin Taylor (Medic Skateboards) and John Anderson (Focus) who pounded the ramp relentlessly. Is there anything that can’t be done on a good mini-ramp – apparently not. 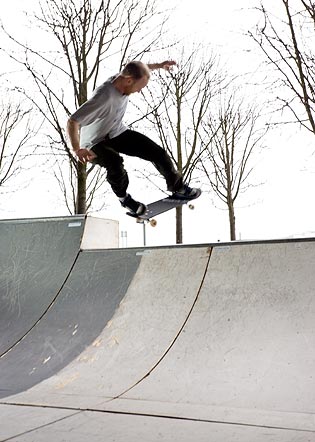 Add to the groove a mountain of gratis Creme Eggs thanks to Forth FM at the front door, the deck chairs, some local kids running home for their decks, an occasionally surreal audience ranging from auld yins (myself excluded) to some chavies, much to the consternation of a rather tense security guard, to the girls in the bus stop laughing at Seanie Bee’s Sunday afternoon sesh (if you were there that’ll cover it) and we had ourselves one major mellow Easter weekend.

Where are we taking it next?