Hurtling gales, driving rain and Chitty Chitty Bang Bang on the box – only one thing for it. The Crimbo jam.

It was nearer the Hootenanay to be fair but what better time to gather 65 skaters together on a door Saturday and let rip.

For the festive frolics this year Skateboard Scotland scratched at the door of Unit 23 in Dumbarton until Chic took pity on us and let us in to carve all that is wood and grind some of that wax of all things metal at Scotland’s gnarliest indoor skatepark.

With no money in our pouches it was a product for prizes day but the main aim was just to get a load of folks together to rip it out of the tail end 2006 and just sesh. 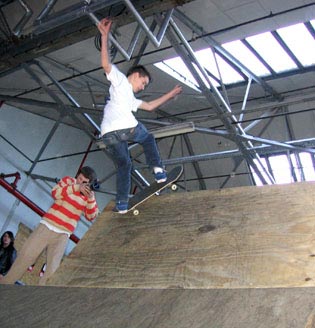 The standard of skating was top drawer as the usual suspects, and a few new ones, tore it up and it wasn’t just to win a set of wheels or one of the decks our sponsors had kindly donated, it was about bringing the steez and laying it down.

The bowl was well sesh’d all afternoon as rails were clattered, tails smacked, and air grabbed interspersed with the odd old duffer going roond and roond and roond.

To kick some prizes out to the masses, I did say 65 turned up didn’t I, we ran a rail jam. 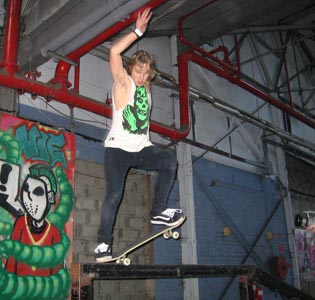 It’s really difficult to remember who won anything and I apologise for not giving props to those that pulled it out of the bag but things were going off so thick and fast I couldn’t keep up. But prod was distributed nonetheless along with a shiny Medic stick.

Somewhere along the day, I really can’t remember as so much went on and it was a long day full of Yuletide goodness, a fair smattering took refuge in the canteen place where Chic has set up a projector linked to a dvd to show flicks on a massive white wall which is about 20’+ wide.

The main draw was when we put on a special dvd Perry Kruger had put together for the jam. Perry’s War Of The Roses 2 footage packaged nicely with an up to date montage of the Livi clan at various skate locations.

Total roastin’ it was too not to mention a trailer for forthcoming dvd proper which is well anticipated. It all went down a treat along with some other shiney wee discs including Transitionally Speaking – Stu’s Christ Airs coming at you on the big screen are not for the squeamish and some old clips of Benson make for good viewing.

A Cheese & Crackers inspired mini ramp jam was next on the activities front. I had come up with his after repeated absorption (is it a word – it is now) of the Crackers dvd and every now and then people pull it out (Vicar) on the mini ramp at Unit23 but the opportunity to have load of folk sesh together on the wee ramp in hall 1 was too good to miss and it certainly didn’t disappoint. 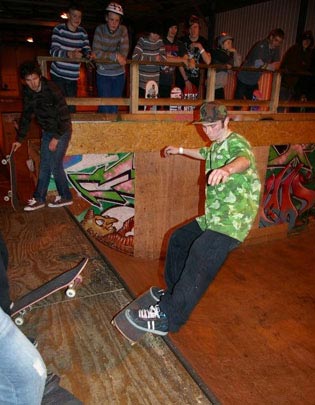 Matt Fenton, Jordan Coleman, Shaun Allison and a host of others ripped the wee ramp up with bearings, wheels and shirts going out but the deck for the mini ramp went to Benson who put together some really smooth technical runs on the wee ramp.

Back through to hall 2 we all went though as time was gettin’ on an folk were buzzin for more action. Earlier on in the day some guys had really good sesh tricking from the top of the flatbank beside the bowl down to the flat and Rick’s suggestion was for best trick over the flat bank.

It all got lost in the translation tho’ and it just didn’t work out as hoped with folk tricking up off it into the throng waiting to start runs. In an effort to avoid impalement if not possible death by stick tae the heid we abandoned ship and went to the bowl. Nice try. We’ll get it right next time.

Benson wanted a Texas Death Match and so it was to be, only I don’t think a lot people knew the format and seemed to wait it out to start a run.

Again this was abandoned and we announced the start of the jam at which point everyone with a plank started throwing into the bowl and started battering it senseless with as many as five in at one point. At least it kept Benson happy and quite right too cos it was a good sesh.

Folk were dropping in and pulling it out and just when you thought you had a winner for a full set up someone else joined in and did something ridiculous.

If this was anything to go by War Of The Thistles 2007 is going to totally rip as none of this was going down last year as folk got to grips with the day old bowl.

So many folk I know to look at but not by name stepped up and threw it down. Again Jordan Coleman and Matt Fenton, various Livi’ans, Fifers but that’s the problem with jams it’s a free for all and it’s not easy to keep track.

Eventually early thoughts were confirmed with Shaun Allison pulling of some neat frontside feeble manoeuvres and generally good all round taster of what’s to come in April taking the bowl swag. Well deserved but it certainly wasn’t an easy decision and at one point it looked like it was going to go on all night the standard was so high.

So with the usual prod toss, the board being won by a snatch an’ run like buggery tactic, we all sat down and took a breath.

Everyone seemed happy. Nae tears, nae maws greetin’ aboot their bairn being better than some other grom. It was what it was.

Just a good winters day out for a good bunch of folks at a damn fine park.

I’d just like to finish off by saying a huge thanks to the event sponsors – Medic Skateboards, Boardwise, Kaos, FourDown, Clan and Focus skateshops. If it wasn’t for these guys we wouldn’t have anything to dish out and of course to Chick and the crew at Unit23 not just for facilitaing the jam but for giving everyone a quality park.

And to everyone who came along and took part in the day whether they had it in the comps or not I think everyone had a good time.

» Some video clips from the jam can be found at http://www.perrykruger.co.uk/