“No matter how full a reservoir of maxims one may possess, and no matter how good one’s sentiments may be, if one has not taken advantage of every concrete opportunity to act, one’s character may remain entirely unaffected for the better. “  – William James 1842 -1910 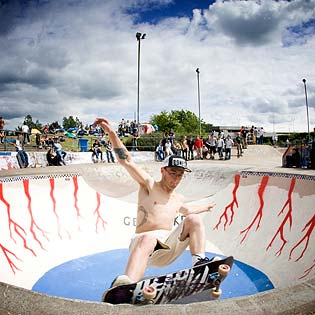 Ahhhh Livingston…
My head is awash with metaphors, all vying to describe this aged jewel of a ‘crete park, swarming with skaters both amped and chilled. I won’t bother, it’s all been done. You know what it is. Too many memories were to be born and lost in that weekend chaos to be adequately described to anyone who has never been to one of these weekends.

It is so typical of the event that a guy can casually lob an unopened beer can that had rolled in, from the bottom of the big bowl, 30 metres over his shoulder and directly into a waste-bin he couldn’t even see. This chap had gone in to retrieve the unwanted obstacle in the spirit of midnight health-n-safety / fun, and was being heckled for his bother. He blushed and gave it a random chucking into the darkness, ran out of the bowl, and was greeted by sudden cheers as the impact is heard, witnessed and word relayed around the bowl-side.

Some might say; “That’s Rock and Roll” or even “Metal.” I would wager though, that relatively few would say; (and I quote) “It’s all about Hip-Hop.”

Nor, as much as the rap-ists who presided over the kindly donated sound system would like to believe their own strangely insular chants; was it “…ALL about Edinburgh…” or indeed ‘…all about Scotland Yard recordings.”

No pal; it is in fact; ‘all about skateboarding,’ and more importantly; all about a world-wide camaraderie of skaters who have been known to travel to Livi for the event. Although this year’s attendance from our English brethren was scant due to several other southern events coinciding with the Fun Party, there were a few hardy souls who travelled up and represented HARD. There was a very welcome raiding-party from France, and a chap who’s t-shirt proudly swore allegiance to Pakistan… how far he’d actually come was unknown to this reporter. 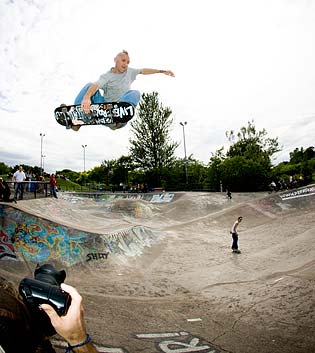 In fact; due to the lack of wider attendance this year, the trophy was not passed onto a new champion, and will reside in Kenny’s house until next year. There were a few subsidiary comps to spice Sunday up, and I’m sorry but all I can remember is that Sprocket took some long-deserved honours for hurling himself out of the hero-line. Some other kids got props and product and they doubtlessly shredded.  Damn, I’d make a rubbish sports reporter eh?

The general air of skating over the weekend was typical top-shelf stuff. Now With Stu G now a California-based pro and daddy-to-be, he wasn’t there for the now traditional duet with Div on musical chainsaws; scaring people with their lunatic antics around the park. Instead Div performed alone, and held court with casual aplomb, STILL scaring people with antics around the big bowl; like bombing-in over the lip (several times,) barefoot, on a skinny cut-down board called ‘the alligator,’ doing stand-up grinds like… er…he was wearing shoes. All whilst holding a mostly full can of beer (It was only Tennants, and wouldn’t have been a terrible waste to spill, but even so.)

Glasgow Focus’s Mark Foster (a Dundee ex-pat!!) took a shining lead in the bowl on Saturday night with super-fast, growling frontside 50’s, while wearing a huge grin. Good on ya lad!

Whitelock’s classic Powell Skull and Sword reissue with fat bright green Kryptos was a real stoker for all, and an old-school eye-opener for some of the younger attendees who had a wee go on it. Whitelock managed to put that thing into some wonderfully gravity-defying styles all weekend.  The small proliferation of ‘unusual’ skateboards this year was an encouraging sign of creativity. We need even more next year eh?

Young-gun Rob Smith proved his mettle several times over with some now-famous nose-picks (frontside and backside) up onto a 4 foot high chipboard box, and then back into the big-bowl. Think of Wylie E Coyote falling into the canyon, and then staggering off looking and squeaking like an accordion; this didn’t happen. ‘Wot a nutter.’  Master Smith deserves any sponsorship he gets.  Much respect for representing his English brethren, MOST of whom sadly did not make it to our hootenanny. But then there was an odd lack of many Scots too! 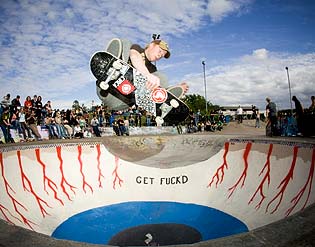 The lack of public liability insurance this year meant no official, organized banter on the mic, nor the traditional live music sets.  (By the way: Why should Kenny O. always be responsible for getting the public liability insurance?  Why can’t someone else help take over the duties of making sure the event happens with legality etc.?  A certain A.L. helped for a few years and got flak for it… why? Will someone else not step up and help organize?  What’s up with all the prissy Lothian infighting?)  Entertainment-wise; the only common complaint from the weekend was that the incessant Hip Hop was a tad overbearing, and that the egos’ of MC’s should be left in the car park. (Thank you Mr Jizz, or what ever your name is.) The consensus of the crowd is for next year to return to traditional guitar-based, metal-styled music please! Hey! Don’t get me wrong; I shed tear when ODB died, but you need a decent helping of AC DC to skate that bowlsafely…But darn it!  Bless the Scotland Yard sound-system that showed up to pump out illegitimate, unlicensed tunes!! It would have been very quiet without them.

Although the rumours had the event marked as an illegal-rave type’o thing that would doubtlessly get raided by bored G8-style storm troopers; it was actually ‘The Most Camping Yet’ according to seasoned locals. It did not pass without incident though, as Friday night turned nasty when some thugs from the local idiot-gene-pool demonstrated some typical track suit-wearing, mono-brow hospitality; stomping some visiting skaters who were camping out; one of whom was already on crutches. The police intervened eventually, but I do not know if any justice was genuinely done. If it had happened on Saturday night I do not think those ner’do-wells would have gotten out of the camp-ground alive.

A tale of beautiful responsibility: 12 or so guys from the re-burgeoning Dundee scene went on a tour entitled ‘Feast with the Beast,’ to take in as many  Scottish and Northern English skate parks as they could before making it to Livi as the finale (17 parks hit pre-livi I believe, and at least two more on the way home.) They arrived Friday night and partied hard. One of their number who had a tad much of Buckfast Abbey’s main claim to fame, spray-painted some abusive gibberish on the back of the nightclub next to the park. When learning of this; the other members of the tour quickly went up to the local superstore the next day, bought some white paint and rollers, and erased the marks made by their now-sheepishly hung-over comrade. Gotta love that steez. I wish more peeps were as responsible… It ain’t hard, and makes you a better person, punk or not.

Speaking of which; cleaning up on Sunday gets harder and harder as more and more hangers-on come along to the event; many of whom clearly have no respect for anything in particular. This year it seemed to be predominantly emo / goth teeny-boppers who don’t skate, but are happy enough to come along to trash the place and throw all their litter around.  BTW; all the tent burning etc. was just plain stupid. I don’t care who, or how punk you think you are.

I really don’t want to end this on a negative note, but The Commanderson and I were close to slapping some of these kids on Sunday afternoon due to amount of Vicky Pollard-type cheek we received from some of these twits when we suggested that they might help tidy up a bit of their own mess. We were waist deep in smelly shrubbery gathering bag after bag of empty, broken bottles, and they were chucking around even more!!

To be frank; I would not blame the council a jot if they banned the event purely for the cleaning efforts that faced their workers on Monday. For years, we skaters have been pretty cool about cleaning up, but I feel standards are really slipping.  Fewer and fewer peeps who come are taking a decent attitude towards policing themselves and their mess, which will inevitably lead towards us ALL being permanently, (and possibly eventually statistically correctly,) lumped in with the chavs and idiots.  Please…lets not let this happen.  Keep the Livi Fun Party alive and happy. Being punk and rebellious does NOT mean crapping in your own bed.

I kinda hope this article starts a wee debate of some description, and not merely because it’s so darn late! (Sorry.)

Rock on. See you next year.