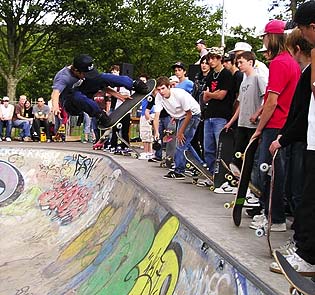 Perth Jam last year was one of the highlights of the Scottish skateboarding calendar. This year GDog (Glen) quite rightfully dodged the red tape that councils seem to be imposing upon our scene to organise another belter of a day. They said it would rain and the week running up to it was oh so threatening to ruin it but Sunday came around and the fair city of Perth was blessed with an abundance of warmth and light. 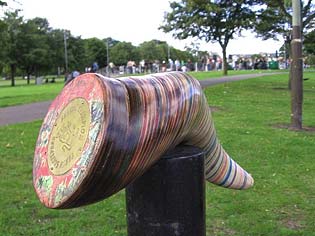 Today was also the public introduction to the newly created Perth Annual Champion Trophy. For those that haven’t already heard Dundee’s very own Daryl Smith has taken a load of old boards, some glue, inspired wood crafting skills and produced the Perth Horn. A mighty fine piece of work. 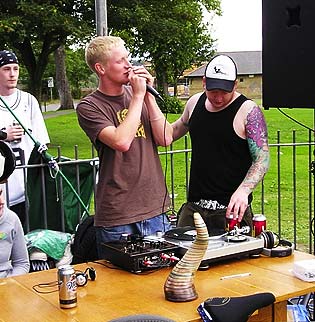 The day’s tunes started out with nothing but a turntable, PA and a Grease (it’s the word apparently) record. Not a brilliant start, but the MP3 generation provided a bit of filler to push things along and things pushed along indeed with a wee bit of spit and polish and a fly cross-fader hand, we soon had hip-hop scratching over Slayer. A fine combination to oil the session along.

The park was rammed with skaters from all over the place rippin’ it up but the comp itself started out with 16 and unders in a few heats leading up to finals. Highlights from these included much trickery up the big wall in the form of crail slides from Kerr, backside melons from Ross Matthews to pick a couple. Wee Matty Fenton from the west coast also showed his usual consistency and sick style in both the bowl, the main park and street obstacles throwing down crooks and his nice backside disaster reverts. When the finals came around, the 3 mins of skating paid off for the man from Haddington, Kerr McLaughlin who took away the big prize booty. Runners up swag went to Matt, Ross and Pete Franz. 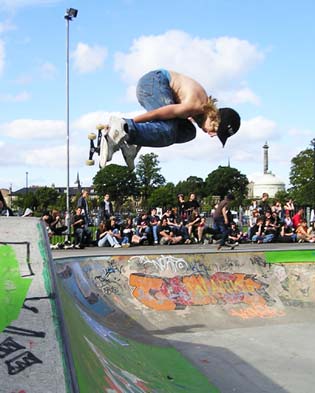 Next up was a bowl session for the size 7 comp.  Basically just a jam in the bowl for anyone with size 7 feet, to take away a nice new pair of skatin’ sneaks. The shoes eventually found Ruari (sorry if this is wrong, we were reading off an old cardboard box that was the entrant list.) as their rightful owner but were hard fought over by the high standard of skating including Benson showing us what could be done with the air space above the coping and Mark T giving the coping a good polishing with his multiple fakie combinations and ollie reverts. 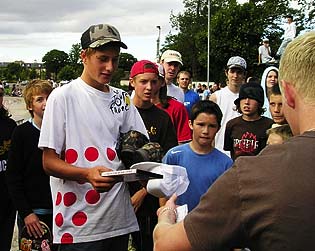 Lastly it was the fortune and glory group. The trophy made it’s first public appearance for it to be fought over on concrete, wood and urethane. No product for these willing contenders, just the opportunity to own Daryl’s unique piece of art for the year. A ten minute jam which could at least be called hectic followed with much wheel screechin, truck gruntin’ lunacy along with the odd collision as everyone already mentioned took to the park along with Benson, Dave Caldwell and a barefooted Ali fae Perth, everyone rippin it up. After some considerable deliberation on the part of the judges the horn was fitfully awarded to Perth local Duggie for as Glen put it “pulling off moves all day never seen before in Perth”. Big mentions went out to Benson and Dave for burning it up big time. 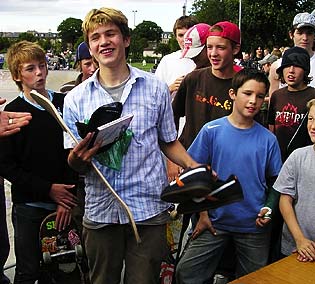 A special prize went out to the young dude who was going about picking up all the litter in “a stolen shopping trolley” and he went a way a happy lad with the last dvd. 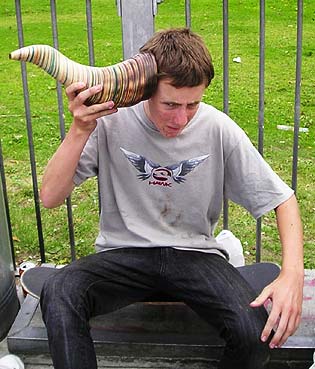 Another brilliant day out that proved that we don’t need to fill in forms or come 1st place to keep our sport alive. Just turn up and enjoy. Big ups to GDog and all that helped organise, Daryl for creating an amazing trophy and Focus for yet again providing a few wee prizes and sponsorship.