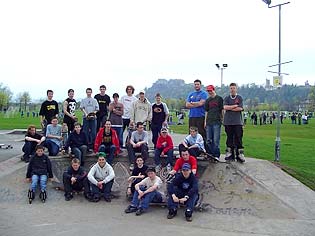 30 Acres was started almost 4 years ago now with the main aim of trying to get a skatepark built in our local town of Renfrew. At the start we spoke to our community police officer, and two of our local SNP councillors. Just to note if anyone else is thinking about a similar project it is important to get these kind of people on board at the start because without their help we would have fallen flat on out faces a long time ago.

We started of with great enthusiasm but soon found ourselves with a problem as the council would not agree to let us have the use of the land. Because of this the project was at a standstill. We couldn’t apply for funding because they wanted to know where we were putting the park, and we couldn’t design a park as we didn’t know the shape of the ground.

Not to be put off we continued to fundraise and made almost 3 grand from various events. For fundraising we have been involved in loads of activities including band nights, race nights, burger stalls, sponsored skate tours and 80’s nights.  Because we have kept ourselves busy raising funds we have managed to raise 3 grand and the council have given us another 22. This is good but it still leaves us with the task of finding the remaining 225 thousand.

When the group started off its only aim was to get the park built but now due to funding criteria our aims have widened out slightly. Funders like SportScotland want to ensure they are getting value for money so they are looking for schemes to help youngsters into the sport and also to put on lessons to help younger skaters. I know this has always been the way whereby older skaters would look out for the younger ones and help them out, but groups who fund skateparks are looking for this to be formalised.

2 years later the council finally let us have the use of the land and we could apply for grants and get a design down which can be seen at www.30acres.com

Currently we are going through planning permission, which is great fun. The other thing we have on at the moment is our 30 Acres decks. As we had raised some funds we decided to take a gamble and invest in 120 decks with the hope we could sell them on to raise more money. Our thoughts were that folk would be happy to buy a deck where 100% of the profit was going to improve Scottish skating, and not to line the pockets of rich americans. 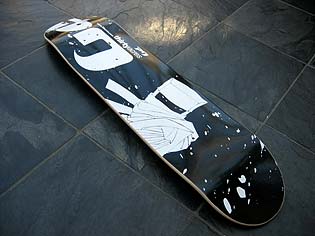 The decks have been a great way to raise money. We started of by looking for companies who could make the decks up for us. We found a company in California who could help us out with the relatively small number of decks we were looking for. This company is pro skater owned and makes all their own boards in house so we were sure they were top quality. We bought a couple of sample decks and after skating them decided to order some up. We had to come up with the design, which was mostly left to our graphic designer mate Steph. After we were happy with the design we paid our deposit and then waited 6 weeks for the decks to be made up. The decks were flown over and we picked them up from a hanger in Glasgow airport.

Were happy with them and they have the most pop compared to any board I have skated. You can pick them up from our website at www.30acres.com or buy them in Focus in Glasgow, 7th chamber in paisley or Gaffneys in Renfrew. The addresses for all these places are on the website.  If you buy online the decks are £34 and you can get another deck for only £26 which includes free delivery and grip.

These are high quality decks made from American maple where the glue has been left to dry naturally for extra pop and not blasted in an oven, which dries the wood out. If you want to take a tour of the factory where the decks are made check out www.abcboards.com.

In the near future if we are approved by the planners we can apply for grants and get the diggers in. We are very proud of our design and when the park is built it will be one of the biggest in Scotland. For all you old school fans the park will have one the best bowl sections I have seen.

If you want to contact us then you can do so from the website. So if you have any views on the plans you can let us know as they are not yet set in stone.