It was an early start. The Skatepark had to stage a Blader, Skater and BMXer Jam all on the same day so the skaters got hit with the first slot of 10-2. Most people managed to get up in time.

The under 16s comp kicked off at about 10.30. The standards were high. The skatepark has only been around for a few months but you could tell that there are some kids who are obviously never out of the place. There were about 25 kids who entered the under 16s. There were lots of nice tricks going down. Kieran Clegg was cruising around the whole park nicely and sessioning the mini ramp very well earning himself third place. Alistair Sampson was ripping it up with a backside boardslide down the handrail and a transfer from the big half pipe into the main part of the park during his first run. What a sick little kid, he got second place for his efforts.There was no disputing who was in first place. Kieran Menzies (I was not judging any of the comps I might add) was killing it in both runs. Burning round the park at high speed he cleared the whole big jump box with a massive ollie as well as adding a kickflip and pop-shuv-it tail grab on the fun box too. You can tell that he is in the park far to often (lucky he has got a paper round or my wallet would be feeling it a whole lot more). In his final run he dropped in from the massive flat bank as you walk in from the park and preceeded to transfer all round the park at mach 10 with his amazing style. Well done my son!!

The over 16s went off, the level of skating was healthy and it was very hard for the Panel of Sam Paterson, Neil Currie and Seany B to decide who was going to walk away with the cash. They managed to whittle the top 6 down to Ben Leyden, Brandon Ide, Sean Allison, Benson, Kerr Mclaughon and Rory (not going near the second name). Here are some highlights from what went down. Brandon was ripping up the park with his lovely Kelvingrove style. He made some lovely big spin flips on the banks. He also made a lovely alley oop flip from the quarter to the big flat bank. Not excluding the kickflip backside 50-50 down the fun box block. Ben Leyden was also killing it with sal flips, Frontside pop-shuv indys, and a big kickflip to fakie on the quarter in front of the judges. Sean Allison (Wu tang as Sidewalk prefer to know him) was like a man possessed as usual flying round the park with rocks on the wrong part of ramps as well as trying a chink-chink down the hand rail and taking some major slams in the process.

Rory was ripping it up. He was super consistent with lovely tweaked airs over the big jump ramp followed by a lovely tail block at the top of the biggest flat bank as you come in. His efforts earned him third place and 50 quid to go home with. Kerr was ripping it up all day and I have lost track of all the tricks that he made at the top of the big flat bank. Blunt pull back to fakie, Blunt one-foot pull back to fakie and backside disaster to name a few. That obstacle is a silly height and folk making that many tricks up there diserve 100 quid for their efforts. Well down Kerr.

Not all of you will be aware but Benson is hoping to make the transfer Stateside very shortly and was in need on some serious cash to help him getting across and started up over there. He thought that he would try and win the 200 quid first prize. To be honest with you the way that he was talking to me earlier in the week he seemed to think that he had won it already. Cocky wee bugger. Well obviously confidence in your own abilities can pay off as he did manage to win the 200 quid, even if he did manage to take a phone call during his first run. Here are some of the tricks that helped on his way to the cash: 360 indy and backside flip method over the big fun box, Backside disaster revert and Nose blunt revert on the quarter pipe in front of the judges.

Big props go out to all involved with sorting out this event. It was a great day even though it hard to start a bit early. Lovely my wife cooked me breakfast before I left.

Peace to you all and I will see you at the thistles. 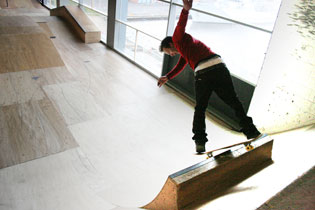 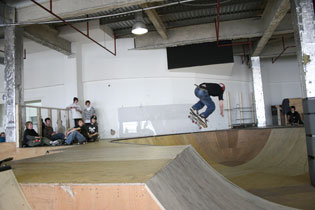 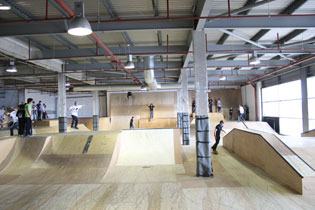 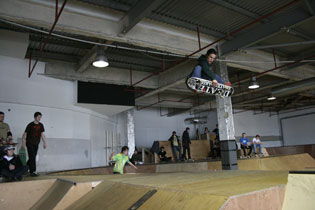 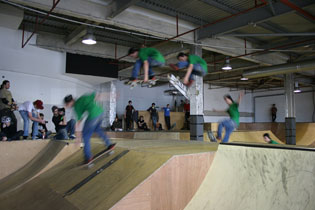 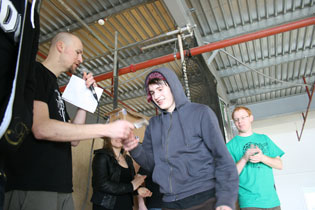 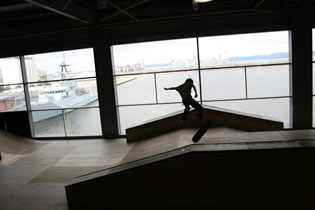 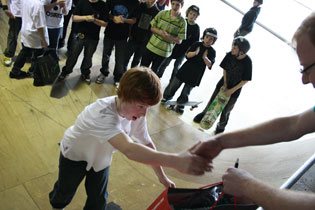 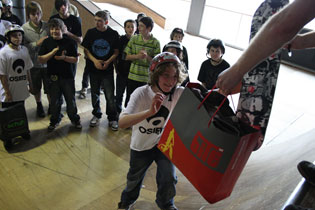 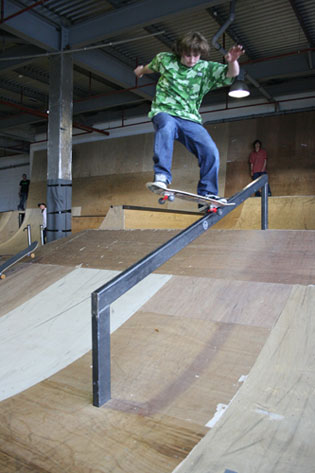