The Kirkintilloch Skatepark Initiative sent us some info and plans of the new park about to be built in Kirkintilloch:

It looks like we are finally starting the skatepark.  It is a sorry tale… it took from 2003 to get here.

The skatepark is to be built on a site in Luggie Park Kirkintilloch.  Although this has lots of good points – traffic free, easy to get to, not too close to houses but close enough to the town centre for food and drink – being on the floor of a valley and near a river meant that drainage might be a problem and it wasn’t possible to dig down too far for the bowls.  So, a bit like Carluke, it has had to be built on the surface.  However, the design is nothing like Carluke.

The park was designed by Dave Partridge.  He met with Kirkie skaters and made their wish list into this park.  The drawings were used for the tender in Aug 2007 and Bendcrete came in with the best price  at £243,000 so they were chosen to build the skatepark.

With the tender process done and lots of evidence of the demand for a skatepark in the area raising funding went well.  By February 2008 the project was fully funded.  The Waste Recycling Group Communities Challenge (Landfill tax grants) gave us £230,000 for the concrete and the Big Lottery Young People’s Fund gave us £187,000 to pay for the peripherals – lights, CCTV, fencing, professional fees VAT etc and the balance of the concrete.  Total money raised was £458,000 including funding from Hg Consulting, East Dunbartonshire Council and the fundraising by KSI members.

Then the fun started.  We only had conditional planning permission and so the first thing was to meet the planners conditions.  This proved to be easier said than done and it took nearly a year for Bendcrete, working alongside KSI, to finally meet these including a detailed drainage scheme.  But, in February 09, just when it looked like building could start a 12" cast gas main was discovered running under the proposed site and Scotia Gas said NO to building the skatepark over the gas main.

So in March KSI had to re-submit for new planning permission on a new site next to the first site i.e. still in Luggie Park just moved along a bit.  But planners will be planners (or some will anyway) and something about red lines and our original planning permission couldn’t simply be moved so a new one was needed.  To be fair, East Dunbartonshire Council pushed this through as fast as possible and picked up the costs!   So now, in June it looks like we are going on site and with a bit of luck and some fine weather it should be ready to skate by the end of August/early September.

But the wait should be worth it.  Bendcrete are sticking closely to Dave’s design and have been working hard to make sure the skaters get the park they asked for.  They will build the park by bringing in preformed shapes which are then covered in spray concrete to give the finished result.  We’ve given them quite a headache but it is coming together.  They have just finished Buckie and Elgin if you want so see what they have done recently…

It’s going to be built on the blaize pitch near to the park entrance which goes via an underpass onto the road to Lenzie Station about 20 minutes walk away. 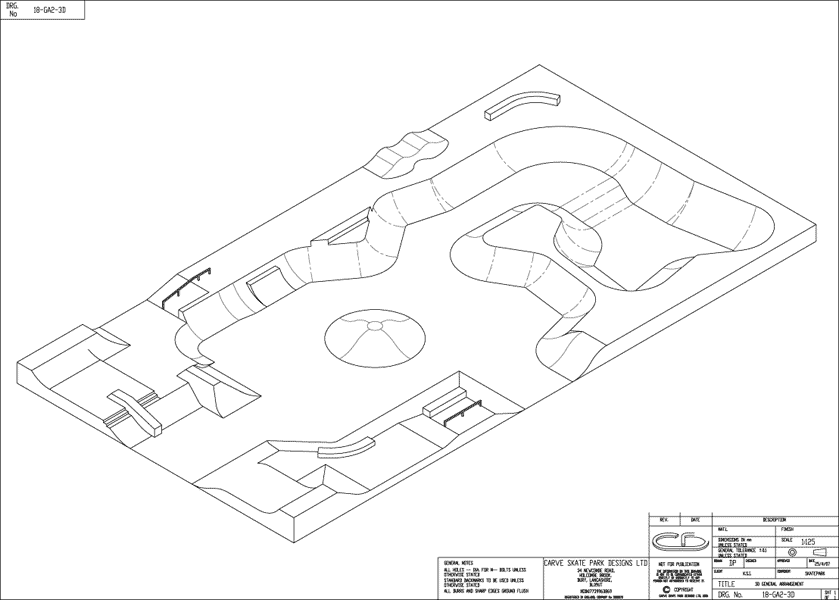