This has been a long time coming (I hear you all say). A bit of background on this one. Skateboard Scotland got Mark Burrows and his long time friend (a amazing artist) Jason Thomson together to produce a graphic for a board to be printed by third foot for Skateboard Scotland. You will of all seen the graphic by now. Skateboard Scotland forum users were given the opportunity to win a signed Skateboard Scotland board by asking Mark questions. The winner of the board is the person who asked mark the best question (decided by Mark). Here are the results:

Do you think your children will become better at
skateboarding than you one day?

Ah hope they enjoy themselves
as much as i do. Hell, they may well rebel and f**k skating right off and
fruitboot or somethin. However ah can say that they’re both better at bein
ginger than me.

What is the most
gnarliest slam you have taken?

Thats
a long list there but the one that sticks out is fallin backwards into livi bowl
and crackin the back of ma head on the flat where the local scallies burn the
bottlebanks. Aw aye and that was ma first time at livi. Didn’t know
s**t.

Is there anything you wouldn’t indy nose
pik?

Where is
the most bizzare place that skateboarding has taken
you?

Hands down Bahrain wi the adio boys.
F**kin loved that place. Thanks Nick.

How many trucker hats do
you own?

Where is your favorite spot to skate in
Scotland?

Drill hall cos it was self made diy lets
f**kin do this and keep it movin. Ah mean lookin back that was the best times
ever, we had our own indoor skatepark party shack for free. One set of keys for
the door and we had em. Good friends and good times.

Do you have a good balance between
your work/family life and your skating?

No. I work way
too much. Its real expensive bein me.

If you
tried to strangle a smurf, what colour would it
turn?

Have you ever banged yer heid in the bristo banks
subway?

Yup, a few times. Punched aswell. That
subway is so low.

Ah miss Tattie a lot. He’s happily
married in the States now. Ah would have the best times skatin a curb on a wet
sunday afternoon wi him.

Decks
right round the lower part of ma plasterin arm.

If you could skate
anywhere with anybody, where and who would be there?

It
would probably be that park in the cayman islands with everyone ah skate with at
the moment and my son, Ollie, and Tattie and Ricky.

Recieving my first proper set up with
independent trucks.

Do you like snaking others? (especially at OT
thursday night sessions or any skate) haha

Ah don’t snake anyone. Ah roll in and get
ma shred on. Just like you should.

Do you think ur a
intimidating guy to others at skateparks?

Nah not at
all.

If you add together ever gind you
have done in your life, do you think you have grinded the length and or width of
the UK yet?

How do you
have so much fun all the time?

Fun is a funny word fun is.

Do you mean to learn all
those tricks you do or does it just happen?

Have you and scott ever had a
fight? who won?

Have you ever done a blunt heelflip
out?

Are you f**kin kiddin? Have you seen ma blunts?

How
much did tat jeep car thing you have
cost?

How often do you shave your
head?

How many hats do
you own?

Do you ever wish you grew up in haddington
instead of tregnent?

You have good observational
skills or you’ve just watched a jimmy carr dvd.

Why do they sterilise
needles used in lethal injections?

They don’t, they use rusty
blunt bent ones.

If a offered to buy you a
drink in the pub and put a tune on the juke-box, what drink and tune would you
choose?

Aw,
Ah would be sittin with a pint of budweiser and a chaser of sailor
jerry’s and we’d be listenin to "workin man" by Bob Wayne and The Outlaw
Carnies.

I heard through the grapevine that your a HUGE fan of Jason
Statham, that charming cockney thug of the tellie, is this true?

if a offered you 1 million pounds to cut off one of your
pinky fingers, would you do it?

If you knew someone who was driving their car with no
insurence, would you grass them to crime-stoppers?

Some of the best scottish skaters
I’ve meet have really cool nicknames, like Haggis, Popé, Div, mark 92, mean dave
and Ali "bite the kerb" menzies. Do you have a
nickname?

If you were to have your life made
into a movie, which actor would you want to play you?

You wake up on in hospital, doctor
says he can either save your arms or your legs, but not both. which would you
choose to have amputated and why?

Do you shave your head less or more
regularly than you snake?


Are you onroad or offroad?

Are those hands or plaster scoops?

These hands
are a lot of things.


What is a bowl with no coping and no trannie?

According to Mark the best question was the tregnent
one. So the lovely Mark Burrows signed Skateboard Scotland board goes to Kerr Mclaughlan. The prize was signed and awarded at OT skatepark Check out the photos. 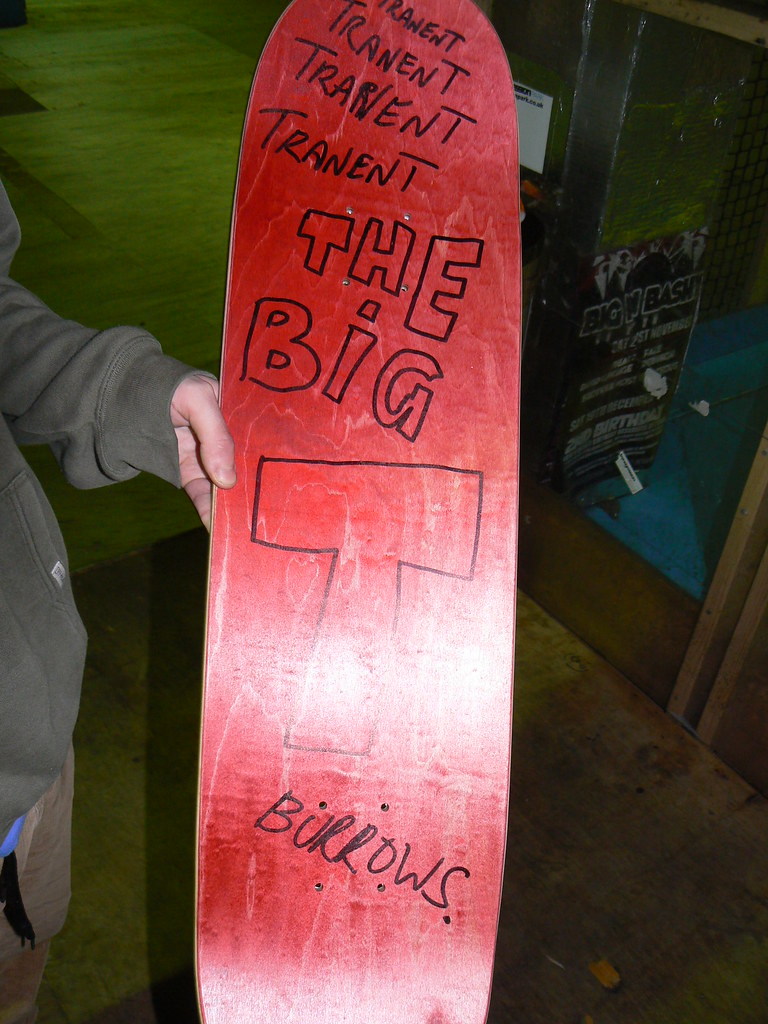