Not the best weather today.

However that did not hold back Scottish skateboarders making the pilgrimage to Dudhope Park in Dundee to try and skate the lovely curves. Unfortunately the Sun Gods were not with us and it ended up being a Mini Ramp Jam with Free Stovies (of all things). Unexpected but rad all the same.

Pannit kept the crowd amused by wearing a gold suit dancing and surprisingly enough Panning it (head first into the bowl). You don’t get nicknames for no reason you know!. Ben’s weird man on shoulders of dwarf outfit creeped a few kids out but kept the rest of us amused during the showers.

So a mini ramp jam it was and it was fun to watch (while it lasted). Photos will follow from Zeefoto shortly. Terry was styling it up, Kieran was going big and made a nice backside transfer. Martin however was doing his crazy brand of mini ramp skating that never fails to impress the judges. Fakie 360 shuv to noseblunt on a damp ramp anyone? Mental. The list of tricks which he made on the day was too long to go through. Bring on Perth Tomorrow. Here are the full Slayer Points results from the Dundee Leg:

Extra points to Pannit for Panning it and to Ben Thomson for skating in the coolest fancy dress costume I think I have ever seen. 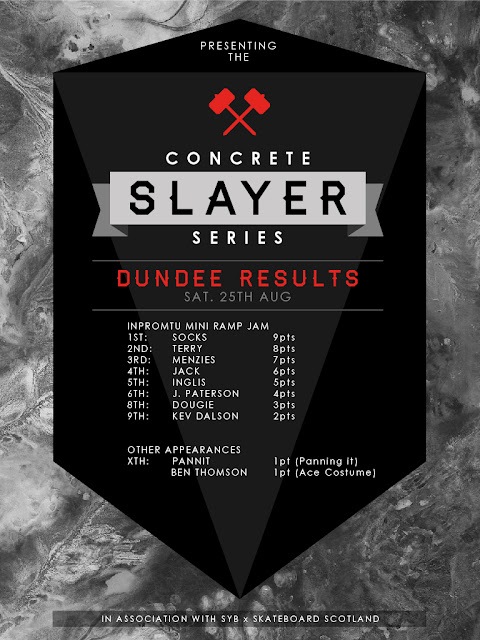