The Perth Jam has been one of the longest running Scottish skatepark Jams. 2nd only to Livi. Perth skatepark was built 10 years ago with a lot of help from Slobs (among others) and he was there at the 10 year anniversary and skating as good as ever. Glen did Scottish skateboarding proud and sorted out the jam for another year with lots of product and rad beats. After the washout that was Dundee the day before the weather was pretty much perfect for skating. The park was well busy with folk from all over the country turning up for a Shred. Hus and TJ made the epic mission south while the Renfrew, Dundee, Kirky and Saughton crews where repping hard for the Jam.

Pete the local Perth destroyer was ridiculous! He knows the park inside out and could pretty much do any transfer in existence with the best style available. That boy will go far. As usual Martin came with his mad rad bag of stupidly hard tricks which we never seems to fall off. The judges (one of which was FERG! would you believe) judged him highly. The level of skating in the final was off the hook and it was really hard to separate the 3rd to 6th place riders apart. Hence we had a joint third place for Terry and Keiran. Terry took a bail early (in fact quite a few collisions took place in the first few minutes of the final) but he managed to recover well enough to nail a few backside bluntslide 180 out’s on various obstacles. Keiran was going big and making some massive ollie transfers.

Winton and Blair where their usual technical selves and impressed the crowd with some really hard tricks. Inglis was solid and made some lovely backsmiths all round the park. TJ was representing Elgin and he did them proud with a solid effort put in. Slobs skated better in the earlier rounds however the few tricks that he attempted and made were as styling as ever.

I have to say that this has been the funnest leg of the Concrete Slayer series so far. The weather has been a pain all year and this jam was spot on. Massive props to our fine hosts! the Perth Boys!. Here is to another 10 years of fine shredding.

Here are the results. Footage and photos to follow: 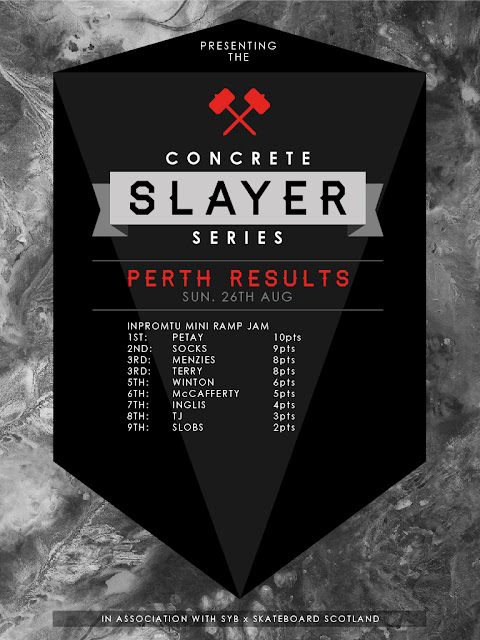