Skateboard Scotland organised the 9th War of the Thistles event to be held in Aberdeen’s Transition Extreme and North Berwick’s The Space over the May day holiday weekend. As you all probably know by now War of the Thistles is not your standard skate comp with rules, scores and placing’s. It is an event all about fun and winning cash and prizes for making sick tricks. We need at this stage to say a big thank you to all of the different sponsors that enabled the event to be its usual success. Check out all the logos below for all of the different companies that supported the event this year.

As usual at Aberdeen the Skateboard Scotland board took the opportunity to dole out all the product from the sponsors to the unsponsored riders in the street section and mini ramp. For some unknown reason there were not that many kids in the park for the event (unusual for Aberdeen). In fact Ali had to practically force people to get involved with a product toss at the end of the Jam. Not sure whether the kids that were there did not know what a product toss was or maybe they were just too shy to get involved. However eventually all the product was doled out and we were on to the jams for cash. This year there were Jams in the Mini Ramp and the bowl as usual as well as the first ever death race in the park. This was a fun wee event where groups of 4 or 5 skaters raced around a predetermined route to try and win a chance to race in the final. The initial few runs were classic to say the least with folk flying everywhere and some amazing slams to watch. We ended up with about a 7 man final death race in which Kieran managed to skate really well, backside ollieing the quarter to vert wall in the back corner to keep himself ahead of the rest of the riders. He came first and won himself 50 quid. Adam Paris and Tea Bag won new boards for coming in second third. Props to everyone that took part in what was a fun part of the day.

We started of the tricks for cash in the miniramp this year as an executive decision was made to scrap the street comp for a change. Kieran Menzies was pulling some massive ollies and fast smooth lines. Div was killing it with lovely floaty ollies and gnarly tricks on both the extension and oververt sections of the miniramp. Div’s brother Colin was not far behind with loads of sick tricks on the extension. The Welsh contingent were also skating rad. Chav Dan, Jake Colins and Sox were all going off have getting involved with some dangerous death match style runs with more than one rider at a time sessioning the ramp. We then moved on to the finale in the bowl. The Aberdeen bowl is the funnest thing to skate and is always the centre piece for the event. We were treated to the joys of doubles sessions with Div and Scotty. They showed no fear and skated so close to each other during these runs that it is a wonder how none of them came out of the event injured. Andy Scott also treated the crowd to the raddest inverts that I have seen for some time. Sox was showing the crowd some of the mental tricks that only he can do, Ollies out of the bowl to wallride back in and switch backside bonelesses to name a couple. Jake Collins was also skating well and eventually managed to make the fronstide nose grind pull back into the big bowl. Div was absolutely destroying it all day and well deserved to win the first half of the Thistles Claymore and 150 quid for his troubles. Most people chose to head down to Edinburgh for a night out prior to next day in North Berwick. The Welsh contigent were hyped on seeing Big Narsty MC at a grim night in Edinburgh so that was where the party headed. The bongo Club did us proud and a good night was had by all.

A relatively fragile Ali Menzies was stoked to get some help on the MIC for the second day from the esteemed Mark Burrows. He guided the kids through the unsponsored event in the main room at North Berwick and ensured that all the Kids that were skating well got some rad new product. Wee Saul, Alex and Ollie were leading the grom section skating the park with ease. They cleared up most of the product before the unsponsored Jam kicked off. This was in the same format as the kids section and the skating certainly moved up a level with Scott Burrows shutting down the unsponsored section by making a blunt heelflip back in on possibly the most horrific quarter in the park.

The first sponsored Jam was also held in the main room with all of the riders getting involved to try and win some cash. Ric Fields came all the way from Manchester and back 360 ollied the whole fun box earning himself 10 quid. Colin Adam was skating fast and made a backside boneless on the awkward bowled out corner. Jake Collins made a nice axel stall pull back on the wall on the edge of the park and Kieran Menzies was as usual going big. Next the sponsored riders moved into the newer street section built by Concreate the year before. The session went off in here with the rail getting sessioned hard. Some guy that I did not know even boardslid up it. Not easy with the height that it is. Colin Adam bonelessed the gap at the far end from flat bank to flat bank and generally skated really well. Rab’s wallride was pretty gnarly too and well deserved after all of the heavy slams he took getting to it.

We finally moved onto the vert ramp for the last section of the day. This is where Andy Scott and the Adam brother’s moved the skating up a notch and pretty much took over. If the schralper award had been given purely on the vert showing for the day Andy Scott would of taken it. His ability to shred on vert is mental. We were treated to a heelflip mellie and a kickflip indy along with a selection of amazing runs peppered with sick inverts. Colin was skating really consistently and made rad nose stalls on the extensions at both ends of the ramp while his brother Div was going ridiculously big. It was pretty close between Colin and Div but the Skateboard Scotland Board eventually came to the decision that Colin deserved the second half of the claymore for his effort s during the course of the day. I would also like to mention Wee Saul here as he was skating with the big guys and making it look easy. He is definitely one to look out for in the future. There are not many 12 year old kids winning cash during vert comps in this country.

It is getting harder and harder for the board to judge the winner of the day but we definitely thought that the Adam brothers killed it all weekend and deserved to walk away with the extra cash and the trophies. It was good to see that Jeff Adam (the boys Dad) was stoked to get both halves of the claymore in the house. Proud Dad I am sure. Anyway another rad event went down. Make sure that you all get to next year’s event where we are hoping to host it at an indoor concrete park! However wherever we hold the event next year it is going to be a big one as it will be the tenth year of the event! So make sure that you come along and experience it first-hand. 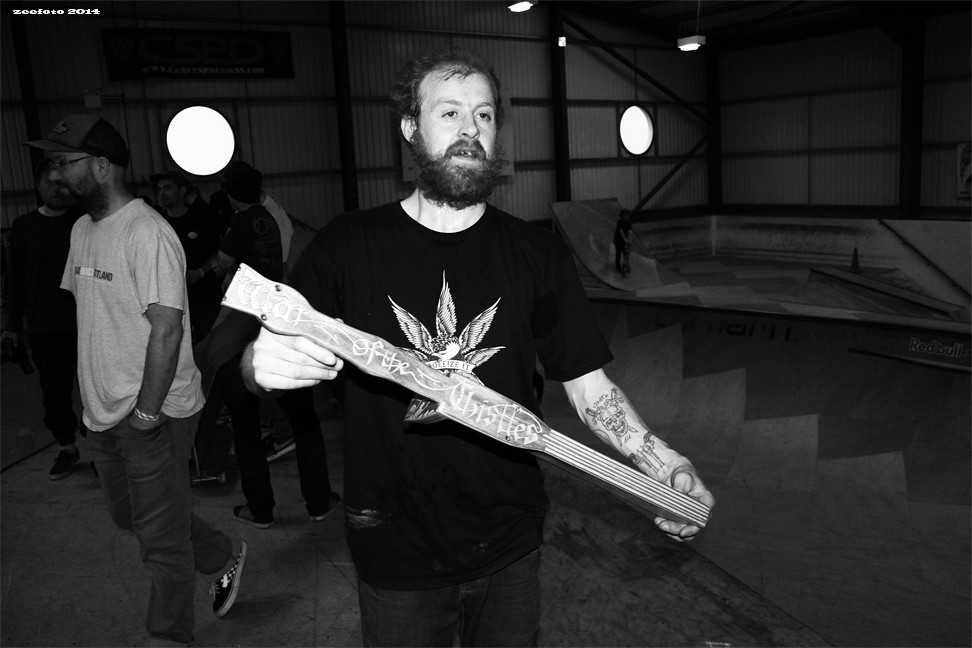 A big thanks again to all the sponsors!