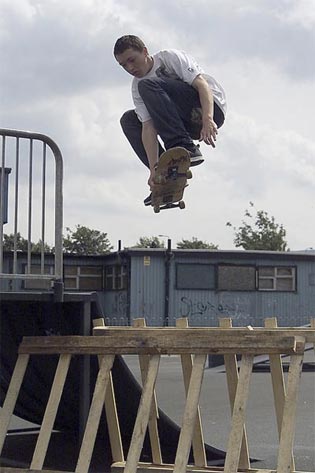 After overcoming the council red tape (i.e. not asking them to run the event like we did the last couple of years) we finally managed to stage the 3rd annual Sighthill Jam. We managed to pick the right day again and the weather was amazing. I was in full beach attire (flip flops and all) as my ankle was too knackered to skate anyway. The Scotland Yard crew were on the decks again and the tunes were dope. We had the esteemed judging panel of John Anderson, Neil Currie and Sighthill local Ronnie passing judgement on the proceedings. For each of the three age groups we had a couple of heats followed by a final. 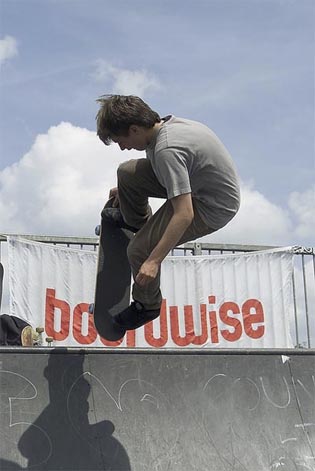 Here are the results and highlights from each group:

Looks like quite a lot of the under 13s were moving up the age groups this year. There were only 7 entrants to this group. Damien managed to win again although the judges found it hard to distinguish between the top two this year. Highlights included Damien almost backside flipping the big launcher and Kieran’s ollies over the hip.

The Dark Horse conquers. None of the judging panel were expecting the skating which we saw from Thomas. He killed it. He cleared the fun box twice and stuck frontside 50-50s and 5-0s down the ledge at the other side. Add to that a few real styled smith grinds on the bars. You could tell that there is a nice ramp in Haddington as Kerr killed the mini ramp with nice frontside tailslides and ollie blunts to fakie. He was also making some crazy roll in reverts into the quarters where we thought he has going to meet his demise.

Paul has been skating Sighthill since it opened and has always been sick there. He made a couple of real nice blunts to fakie on the quarters, but it was his flips on the bank that made it for him, kickflip to fakie, 360 flip to fakie, half-cab heel. Graham had a nice style and made a nice chink chink down the grindbox. Daniel was not his usual self and kept just missing landing things, although he did land a nice k-grind on the fun box.

It was a real good day and enjoyed by all as usual.