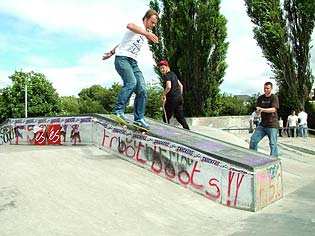 Skateboard Scotland have been thinking about running an event at Falkirk for the last couple of years. This was going through the mind of Youngo (Local Falkirk man) too and we decided to get together and make it happen. We went for a very laid back style of comp similar to the War of the Thistles format – basically pick a few obstacles and see who wins what.

We had cash and product from Snickers (no chocolate though boo) to give away along with product from Focus, Es, Globe, Century (local Falkirk skate co.) along with the final remnants from Stu’s DB boardstore (RIP). Big thanks goes out to these sponsors as without them no-one wins anything. We kicked off with the mini ramp size 8 comp. This for any kids that wanted to win some of the size 8 samples from Globe. The kids were going off. Jordan was making some nice sal flips. Isaac made a few choice maneuvers and came away with a pair of shoes as did teabag. Sean from Blantyre made some real tech lip tricks including frontside nose grind reverts and frontside ollie fakie backside 50-50 which blew me away considering how much of a bladers ice rink that ramp is. He got a few quid for these. Wu tang clan ain’t nuthin to F**k wi. Div took a few pound too with his nice 360 flips on the mini. 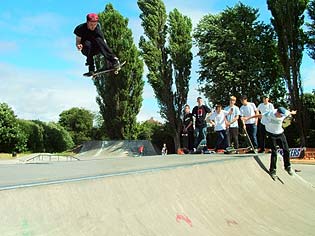 It was decided that we should see who could clear the gap from the park into the mini first for 30 quid. I’m pretty sure that you can guess that Div made it as did Benson pretty much at the same time so they each got 20 instead. 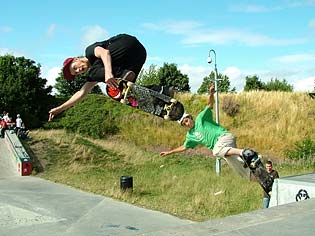 Next we moved onto the hips coming out of the mini. Benson nailed himself a 360 backside grab which earned him a few bucks.Quite a lot of nice stuff went down and folk came away with some nice prizes. Isaac could not nail the varial and so missed out the chance of the free board. Better luck next time. We then moved onto the hubbas. Sean earned himself a new board with a smith along the flat and down the slope. I have to admit I missed it which I was pretty bummed about but the crowd spoke up and the board was awarded. Mr Sylvester did not hold back on the hubba and nailed a massive ollie over the fun box to Frontside 50-50 down the other side. Add that to a smooth fast frontside t and the man came up with some cash. 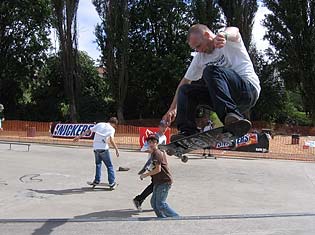 The final obstacle was at the back right hand park of the park. Div and Benson cleared up here with a selection of double runs clearing the gap. A local Falkirk man won his girl and nice new hat that she had always wanted. Me and Youngo were wondering if anyone was up for grinding the whole big silly long bar for 30 quid. As normal with these comps Div eventually stuck the 50-50 and came away the richest man at about 120 quid closely followed by Benson with 100. Who said that it doesn’t pay to practice. 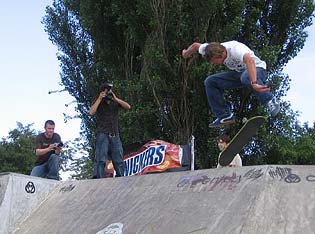 We could not decide who to award the nice Killing the Kirk board especially made by Roy from Century. It was decided that the person that made the craziest trick on the flat would come away with this lovely souvenir. I would go into the tricks that were performed but I don’t think that they all have names. In the end Graeme Fleetham from Dunfermline came way with the prize after a couple of back flips and hand stand fingerflips that would make Rodney proud. 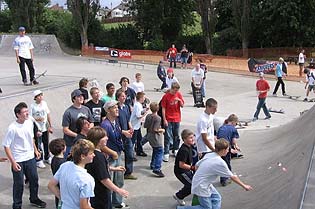 We all had a real good day since it never rained and a few folk went home richer. Big thanks again to all the sponsors, Skateboard Scotland and Youngo for organising the event and last but not least Seany and the Scotland Yard DJs who kept the tunes going all day as usual.