The start of a promising Summer of Skateboarding in Aberdeen was marked this week with two epic days of wood and wheels carnage.  June 21st was recognized around the globe as “International Go Skateboarding Day” and Aberdeen was no exception.

Despite the recent development of a world class skate facility in the city, dozens of enthusiasts took skateboarding back to its roots by touring the city’s street-spots that hold a significant history in Aberdeen’s skateboard scene.  The day began as everyone met at the Transition Skatepark at the beach then headed off with a militaristic itinerary of locations stretching right across the city.  The “wee dirl aboot the toon” included the wave wall at the sea front followed by a brief session at the pumping station which was brought to a halt due to complaining workers.  Spirits were not dampened however as the tour headed for the centre.  A quick stop for a P&J photo-shoot and a couple of pints were enjoyed in the afternoon before meeting the Grampian news crew at the infamous “Denburn Banks” who seemed slightly bemused at the situation but were happy to film tricks and have a chat with the organisers. 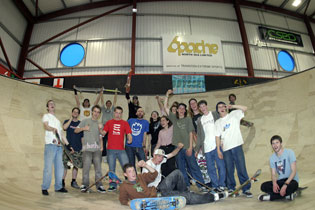 Skaters continued to travel to a range of up-town spots before congregating at Westburn Skatepark for a security guard-free session and a well deserved rest in the sun.  This rest, however, was cut short by the dawning realisation that a fundraising commitment had been made to skate a marathon in the bowl at Transition that night.  This would involve everyone contributing to skating the 26 miles needed in a lap format around the bowl (that’s 1200 laps).  I’m still not entirely sure how we did it and where the energy came from but the marathon was completed in an hour and half, despite a few people falling foul of the wooden beast.  With that under our belts there was little left to do but go home and recover.  So in true “Go Skateboarding Day” style, we met in the pub an hour later.

“Bring your tricks to the sticks” was the idea behind the Kemnay skate jam which promised to be another packed day of skateboarding goodness.  This however was almost not to be with the impending black clouds on the horizon, rain halted proceedings at Kemnay before they’d really started.  As we waited for the rain to stop, huddled under trees eating burgers it became obvious that the jam was a washout and we needed a Plan B.

Plan B came in the form of the Ellon miniramp, a concrete installation built under ye olde “willies shelter” which became the new home for the Jam.  It went off, special mentions must be made to Hussain Smart, Callum Barrack, Mark Ritchie and Kev Bell who all destroyed it and were rewarded accordingly.  The session at the shelter signified a certain commitment to skateboarding despite the rain and thank you to everyone who made it out.

Check it out at www.goskateboardingday.org.