The Kirkintilloch skatepark is on course to be built next year.  The KSI group got an award of £230,000 from the WRG Communities Challenge and WREN last week.  This is 50% of the total funding in place (total project value is £457,900) and they expect to hear from the other funders by February but with such a huge chunk of funding in place they are confident of getting the rest.

The constructor for the project is Bendcrete who will be building the design by Dave Partridge (designer of Burnley skatepark, also helped Andy Dobson with Transition Extreme, etc). The KSI members worked with Dave to come up with this.   The concrete skatepark will cost around £230,000 and the remainder of the money will cover peripherals – lighting, CCTV, fencing, emergency access, fees etc.  They would love to spend more on the skatepark, and if they are able, any extra funding will go on concrete.

They hope to be able to get the old concrete vert ramp that used to be in Inverness as a later add on to the park. They are going to go ahead without it the now as they do not want to delay the park in any way.

Skateboard Scotland support this campaign and the KSI’s funding applications as they have consulted with a good designer and are employing an actual skate park builder to build the design.

In case you guys don’t know where Kirkintilloch is, it’s just north of Glasgow with excellent transport links.  The skatepark site is 10 minutes walk from Lenzie Station, on a bus route, on the Forth & Clyde Canal, near the disused Strathkelvin Railway and, by car 10 minutes from the M80/M8, 15 from the M73/M74 and 20 from the M876/M90 link to Perth, Dundee, Edinburgh, Aberdeen and Inverness.

THE KSI have made some small modifications to the design attached e.g. the spine has been widened and some humps and rails added around the perimeter.

Let’s hope that they manage to get the vert ramp sorted out. If they manage to get it this will be the only vert ramp in Scotland (and it will be in the central belt). That would be great.  They are currently trying to put some pressure on the politicians etc about the vert ramp and it will be an ambitious project because, realistically, it will be difficult to have it as an open access facility. Maybe they could dig it in so that people could not fall off the top.

That’s all for now but we will try to keep you updated as things happen. 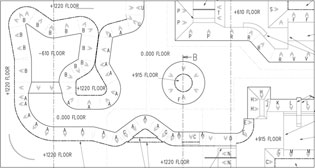