This is the fourth year War of the Thistles has been organised by Skateboard Scotland. The main sponsors of the event this year were Etnies, Relentless, Skateboard Scotland and Baw Bags. Big props to these guys to fronting the cash prize fund! This year it was Dumbarton first:

Don’t know why but it always seems to be a nice day outside when you organise a big event indoors. As myself Youngo and Colin Taylor where making our way to Unit 23 we decided to take a wee de-tour via a bit of crete in Drumchapel north of Glasgow. Thought it best we get a skate in before the chaos and hanging out in warehouses. If you are ever passing I recommend getting yourself along to it. It is not the easiest to find but the bowled out section is really fun to skate. Anyway I digress.

I think that this is busiest that the event has been for the Dumbarton leg yet. There was a good turnout from across the country, Scots, English, Irish and of course the Welsh. We were all stoked to find out that Chick had once again decided to build a new addition to the park for the event. This year he built a new street area for the skaters. We kicked off with a bit of throw some product at the unsponsored riders for making tricks. We believe that is the best way to get everyone involved and ensure that most folk walk away with something at the end of the day. We then moved over to the new street area for a bit more unsponsored action. Paul Clover was getting technical with some nice flips down the stairs. Socks (Martin) was also throwing himself around the place and decided to ollie from the bowl section into the new street area. Matty Fenton made a 360 flip going with it off the big ledge and earned himself a new board.

Next up we had the sponsored riders on the new street area. Quite a lot of the riders that made it up this year wear of the street persuasion. So, there were a lot a technical tricks getting thrown down. Gav Coughlin made some really smooth flip tricks including a laser flip. Nicky Howell was going off with multiple flip tricks on the block on the stairs including a kickflip crook and a kickflip backlip. Paul Sylvester even made an appearance with a switch crook. Double D made a kickflip nose manual. Rob smith also made an appearance and knocked out a nollie 360 flip down the stairs. Once the street are was rinsed it was onto the wee bowl.

This was a total free for all (death match style) as usual. Considering the number of people sessioning at once there was not too many collisions. Kyle managed to clear the gap from the big corner into the smaller section. T-bag made a lovely bluntslide. Porno Paul and Sam Pulley were mixing it up in the bowl and enjoying the carnage. Amir Williams made a trick which no -matter how many times I have watched it on the sidewalk footage I still have no idea what it is called. Rob Smith was going off and making all sorts of ice plants, including one off the slippy metal post. Once the carnage had finished the product toss went down in the bowl.

After the break we decided that a muck about in the blader section was required. Eddie Belvedere, Rad Man and Jess Young were getting stuck into the ledges for a few quid. Rob Smith decided that he would by pass the blader daftness and attack the big sub box along with Seth with various ridiculous tricks getting pulled back in by both of them. After everyone had hurt themselves sufficiently we moved onto the finale in the big bowl.

The big bowl seesion was off the hook as expected. The livi boys were killing it as usual. Stu Graham managed to be over this year (issues with his American visa) and you could tell that he has been skating hard in the States. The speed that he gets in the bowl is silly. Hitting airs out of the vert wall (at one point,over the top of Kyle), backside smiths on the vert sections and 50 50s that never seemed to end. Benson also earned himself a few quid with a massive stalefish and stiffy across the gap, lovely big lipslides and a lush kickflip mellie to fakie. Kerr’s crazy style was keeping the crowd amused. I guess you will have to ask him what all the tricks he does are called, cause I am sure some of them he has made up himself. T-bag was also getting stuck in with switch backside disasters and his lovely fast style. Rob Smith did not fail to disappoint again with blunt fakies on the big vert section, sal flips and all sorts of crazy 360 handplants.

Once all the money had been doled out for the day it was up to the Skateboard Scotland Board to have to decide on the Skateboard Scotland Scralpher of day. There were no real arguments this year and Rob Smith walked away with a lovely new SS Burrows tribute board, the first half of the trophy and a few more quid for his pocket. Well done that man! Most people kept it sensible on the Saturday evening as it was a long way to Aberdeen and with the bank holiday on the Monday and the Roller girl after party to look forward too we were saving our selves.

The later start on the Sunday of 2pm was a pretty good move for the likes of me that had to drive from Edinburgh at 55 mph. Fortunately it did not take too long and the second day of sticking up banners ensued.

We started off on the un-sponsored pyramid session. Don’t know what it is about the session over the hip but it always seems that not many folk make much. Anyway, we managed to punt some product off to the unsponsored guys anyway. Next up was the unsponsored funbox session. This picked up a bit with Hussian flying over the fun box. Product was once again dished out the deserving riders.

It was now time to let the sponsored riders onto the street course. We started off where we left off with the fun box and then the hubba and handrail were hit up too. Lynsky killed it with a double backside flip and a backside nollie 180 flip over the whole box. Barney Page was super smooth and technical on the funbox and the handrails. Tom Harrison made a lovely backside tailslide across the funbox as well as nailing the kickflip out of street area (although all the other riders were doing really well at not giving him the room to make it). Double D made a lovely smith grind on the hand rail, and frontside bluntslide and nose grinds down the hubba. Jess Young hit a frontside blunt revert on the handrail. Chris Jones was making all manner of switch tricks down the rail and hubba. Mikey Wright was getting technical and kickflip nose manual’d and 360 flip manual’d the fun box. The cash was doled out once again.

While the street section finished up, the Livi boys started a session on the newly built two really tight transistions and a big gap set up. Benson made a mayday grind as well as a backside tailslide.. Stu then preceded to rip this section a new hole with a crooked grind, Smith grind and a 180 fakie 50-50 revert out followed by ollieing the half-pipe gap. Mark Burrows also got in on the action and made a backside 50-50 caveman revert oot. Adam Paris made his signature big stalefish across the gap. Mikey Wright got in on the action to with a frontside 5-0 grind across the gap. T-bag joined in and once again demonstrated his ability to ollie into any transition available.

Next up was the half-pipe session. Gav managed to conquer his backside boneless on the sub box after an initial nasty bail. Barney and Mikey were getting really technical in the half-pipe. Rob Smith was showing us that the tricks he made on the Saturday were by no means flukes. Stu G killed this section by flying at everything really fast. He made a backside disaster and backside boneless on the oververt which were ridiculous.

As per usual the finale took place in the bowl. If you have never skated this bowl I suggest that you get there now. It is such a rad feeling to skate it. Colin Adams was putting down some amazing lines in the bowl with all sorts of hand plant and boneless variations. Benson was flying out of the bowl with head height fronstide airs. The speed at which Stu gets round the bowl is just silly. His smith grinds were at mach 10. There was this little kid called Johnny from Birmingham that was ripping it. We was only 11 and was skating the bowl like a pro. I think he must of fleeced me for about 40 quid a few new boards over the course of the weekend. One to watch out for in the future for sure. In the end Rob Smith and Benson were battling for the final 20 quid. Benson was trying a switch blunt 180 out and Rob was trying to the bizarre trick that he slammed real hard on the sidewalk footage. They ended up splitting the 20 in half for their troubles. Unfortunately Rob managed to then break his wrist on his final attempt. After all was done The Day two of the Schralpher trophy went to Stu Graham. Well deserved for how rad his skating was on the Sunday.

Another year over. For anyone that went to the afterparty you will of noticed that we managed to get chicks at it this year. Some of them even got naked. Big thanks to the Aberdeen roller girls for sorting that out for us. Another final thanks to everyone at Skateboard Scotland for organising and helping run the event and all of our sponsors. 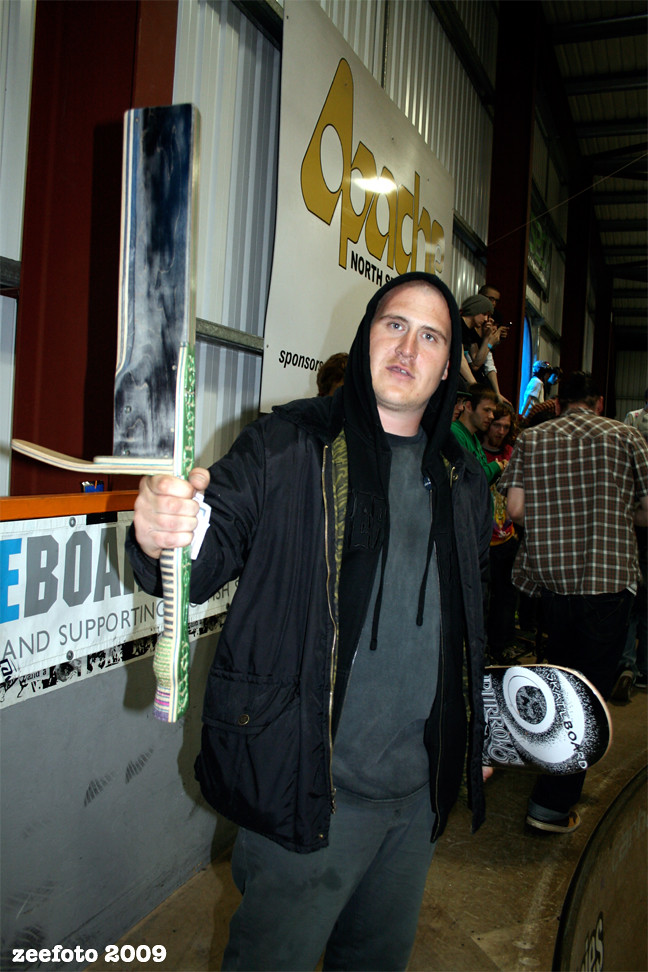