Skateboard Scotland organised the Second Scottish Street Championships to occur on the 13/12/15 to coincide with the Skateboard Scotland AGM. The meeting was held and the board was voted in for another year. However everyone else was there for the Sesh not the meeting! East Kilbride’s Zone 74 was the host for this year’s event and a lot of folks made it through tailbacks and around broken bridges to get to the event. We had crews from Perth, Dundee, Edinburgh and even some late arrivals from as far as Glasgow! Cheers for showing up eventually Team Extreme!

There were enough prizes and cash donated from the kind sponsors (Skateboard Scotland, Zone 74, Lib Tech, Focus, Edinburgh Local and Swellbow) to run an under 16 and over 16 competitions. Both groups skated really well and it was hard to judge. Although not as hard as trying to clear the park of the likes of Shuggy and Paris before each group event kicked off. I think that most people actually skated better in the qualifiers rather than the finals, this was probably due to the heat in the building. This is the hottest skatepark in Scotland without a doubt. Quite nice for hanging around and judging in though. The kids comp was hard fought and Calvin impressed the judges with his hand rail and kickflip to fakie on the big bank. He took the win against the tough competition from the Edinburgh Twins (Jordy and Lachlan) and Saul. The over 16s was even tougher and the Skateboard Scotland judges struggled to whittle down the 20 or 30 of so riders down to 7 for the final. However they managed and final kicked off. Jonny Paterson was getting flippy and tech, as was Winton. Winton also made some rad transfers and bluntsides that brought him into 2nd place. The man putting in the most effort and local hero Grant Johnson sealed the win by making most of his tricks taking gnarly bails over the transfer hip and then pulling off what I can only describe as a Parisesk magic carpet ride frontside flip on the big bank to unplanned tight as you like frontside carve out. That was sick and the crowd went nuts! Well-deserved win Grant!

Having run events at Zone 74 when the park was not managed by a skater we tried to tidy up at 6pm so as to not outstay our welcome. However now that Pete Kelly is running the skatepark we were given 50 quid (out of his own pocket) and asked to run a best trick contest on the big rail. How could we refuse such an offer! So the rail was skated and I think that Ross Zajac cleaned up most of the money finishing off with a frontside bluntside revert which shut down the event. That guys absolutely destroys rails! This event keeps getting better every year. Check out the lovely edit produced by the main man Piotr down below. Looking forward to seeing more of you there next year! 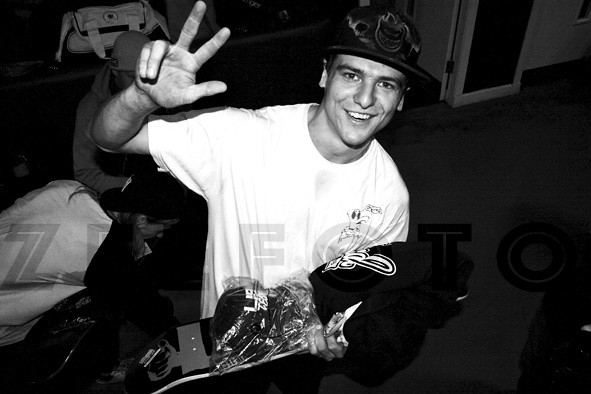