Skateboard Scotland ran the End of Winter Jam at the Transgression Park on the last Sunday in February. Most of the board first decided to have a wee session in the last of the winter sunshine at the Newton Grange skate park. It was a fun wee sesh and wee almost got warmed up before we had to move on to run the first skate jam at Transgression Park since it moved over to Dalkeith. The guys at transgression had cleaned the whole park and it made an amazing difference to the level of slippyness under wheel. So that was great.

Riders came from all over the country and we had a girls, under 16s and Over 16s comps. The quality of the girls was high and Marianne skated really smoothly and with great style to take the win. She almost made a kickflip out of the bowl but in the end it never happened. Next time! Orlaich made some rad transfers over the hip and pulled in second place just in front of her sister Sorcha. The under 16s comp was busy to say the least and there were over 30 riders taking part. Running kids comps is always funny when mothers start asking questions about what is happening when. They don’t really get that skateboarding is pretty organic and things don’t happen at certain times. When will my son’s run be happening, have I got time to walk the dog? Seeesh!

Saul arrive just in time to enter and managed to work his way into 3rd place with some nice boneless combos and rad wall rides. Lachlan was pretty consistent and managed to make lots of tricks up the euro gap and get into 2nd. Anton killed it in the final jam pretty much making all his tricks!

The big guys stepped up for the final Jam and the esteemed MC Mark Burrows even got in on the action. He did well and came in third place winning some nice proddie for his efforts. So it was worth putting down the mic for a wee bit. Jonny Paterson knows Transgression like the back of his hand and showed it by skating really well for his sponsor Libtech (who also sponsored the jam). However he was pipped at the post by Magic carpet rider Adam Paris! Paris did not fall off any tricks and also skated around the whole park with ease. After winning the Over 16s he then proceeded to get into the bowl jam where Kenny from Transgression park had kindly provided 75 quid in fivers to be thrown at skaters who had nice runs in the bowls. It got a bit death matchy at times but it made great viewing for everyone. Bailey took the last fiver with a ridiculous last run involving a lot of revert madness! So good to watch. Kieran Menzies tried to pull a backside nosepick on the top of the vert wall in the bowl but it just would not come back in. 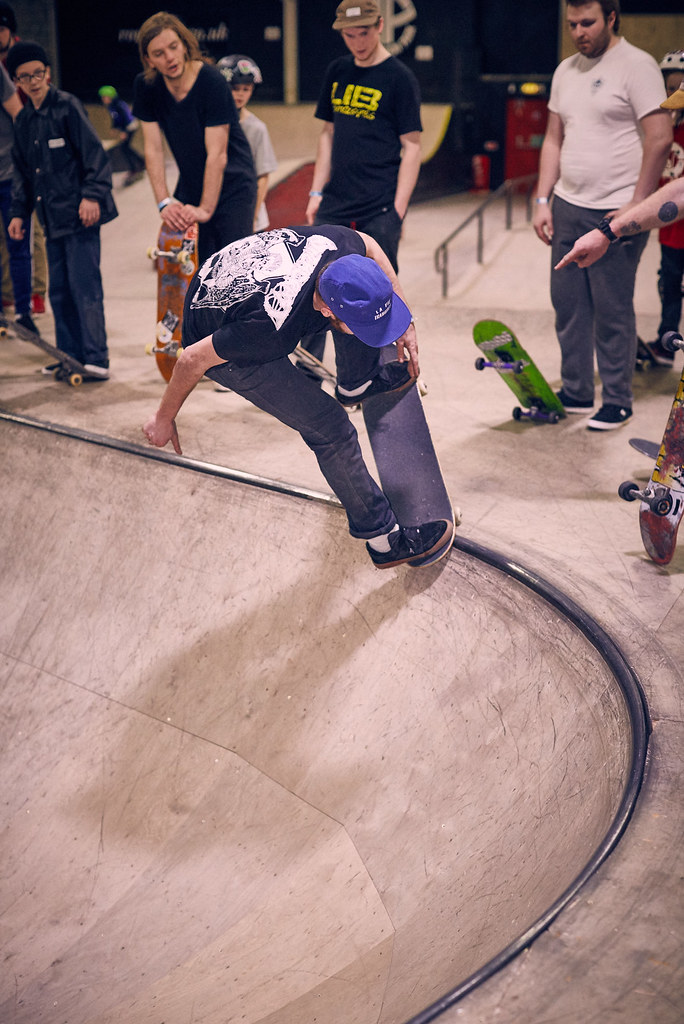