This year’s Saughton jam once again flew in the face of the weather forecast and we almost got away with a rain-free Saturday.

The day started off with the return of the Young Guns jam which saw the under 18’s warming up the session and ripping up the street section and middle earth. The overall theme had a whiff of the 80’s with plenty of bonelesses and early grabs but Wee Man all the way from Buckie sealed 3rd place and nailed a frontside bigspin over the hip amongst others. Park regular, new Edinburgh resident and peddler of Tartan Tat Ali Bongo took second mixing the old with new with inverts and bonelesses to noseblunt – looking forward to seeing those inverts stalled Ali! The twins both charged the park at high speed with grabs over hips and funboxes, up gaps and out of quarterpipes. Lachlan McCormick was combining speed with height and staying on his board whilst others didn’t amongst the melee and took a deserved first place, winning the Young Guns trophy for this year.

This year’s street session went off on every obstacle and provided a great spectacle for all the spectators who seemed to enjoy seeing grown men slam themselves into and onto hard concrete. Daniel Nicholas delivered his usual consistent standard of tech/wheelie flippery as we all come to expect and combined this with his increasing bag of transition manoeuvres. Seth charged about and took heavy slams in between making tricks, reminding all those watching parents to keep their scootering offspring well clear. Shezz as ever killed it and provided my highlight of the day by clearing the entire Euro gap/manual pad set up second go. The session moved to the concrete bench with some new faces stepping into the fray and some nbds were attempted. Terry Beattie styled an array of tricks onto and over the bench and Dougie Rodger did what can only be described as a sliding tailblock along the top. Benson and Charlie were attempting noseblunt slides, front and back respectively with Seth, Kieran and Shezz flying right over the top of it with varying degrees of success. A sweatpant-free Paul Clover shut it down however with flip back lips and front crooks much to the delight of the watching crowd – session over.

A new feature to this year’s jam was the ‘deathrace’ which was in theory a round-the-park, head-to-head speed trial kind of thing. Murray stepped up and volunteered to coordinate, borrowing Kenny Omond’s old slalom cones which saw the light of day out of Kenny’s fabled garage hoard for the first time in years. The round the park race carries on Livi’s rich tradition of similar events – if you didn’t know that Livi’s innovative (for the time) flat bottomed halfpipe was a happy accident to allow some slaloming before hitting the reservoir, you do now.

In the end Murray taped out the cones on the transitions and a few hardy volunteers tested the course to universal approval. Then began a superb exhibition of everything that is great about skateboarding – disorganized, highly skilled chaos, the like of which we haven’t seen at Saughton before but we certainly want to see again. Video footage exists (see below) which gives you an idea of what 12 people in a row, close together and crossing each other’s paths looks like – this is why skateboarding can never or should be in the Olympics.

Whilst all of this was going on we were treated so some serious live thrash metal from Robot Death Monkey and Daniel Wax Off. These guys from The Space in North Berwick very kindly offered to not only play for free but also provide a full PA system and bring their hot dog machine along too. The North Berwick crew is rad and deserve every success. The Space is the best indoor park in the South of Scotland with a great mix of ramps AND indoor concrete – use it or lose it folks.

Next up we had the ‘middle-earth’ session with some fresh faces stepping in and showing us all how to skate concrete transitions. Scotland’s top concrete massager Youngo repped hard for the older guys with Terry and Brian Inglis coming from Perth and Dundee with crailslides and smiths of all varieties. Seth got gnarly again and with his magnetic feet meaning he stays on where others wouldn’t. Aaron Wilmot styled it up with backside ollies and those nosegrinds where you pop out which I still can’t fathom and Martin ‘socks’ Maguire consistently showed why he’s a crowd favourite with all manner of unique and downright technical moves, most of which couldn’t be done on a computer game. Kieran Menzies demonstrated the benefits of growing up over the last few years at Saughton with pop and float that has to be seen to be believed. Huge backside ollies combined with grabs and stylish lip tricks are standard and a noseblunt on top of the flat bank seemed to come easily. The transfer from the side of the cradle into the big flat bank was done with ease, second try I believe. Kieran is killing it right now and you should expect to see more of him.

The big bowl session was just getting warmed up with all those mentioned earlier getting involved as well as some of the older park regulars but sadly the torrential rain had other plans and we were washed out. Despite this a good dose of fun was had by all and non-skating spectators left the park with a very positive impression of skateboarding – strong public opinion makes it much easier to get new parks built in the future.

When the judges convened Kieran Menzies was the clear winner having skated hard all day during each jam. Paul Clover came second after shutting down the street section with Martin Maguire third. I’m so late with this write up that Kieran has also since won the Fundee jam and the overall SYB/Skateboard Scotland ‘Concrete Slayer’ for 2013.

See you all next year.

Thanks to Chris Clark for the video footage! 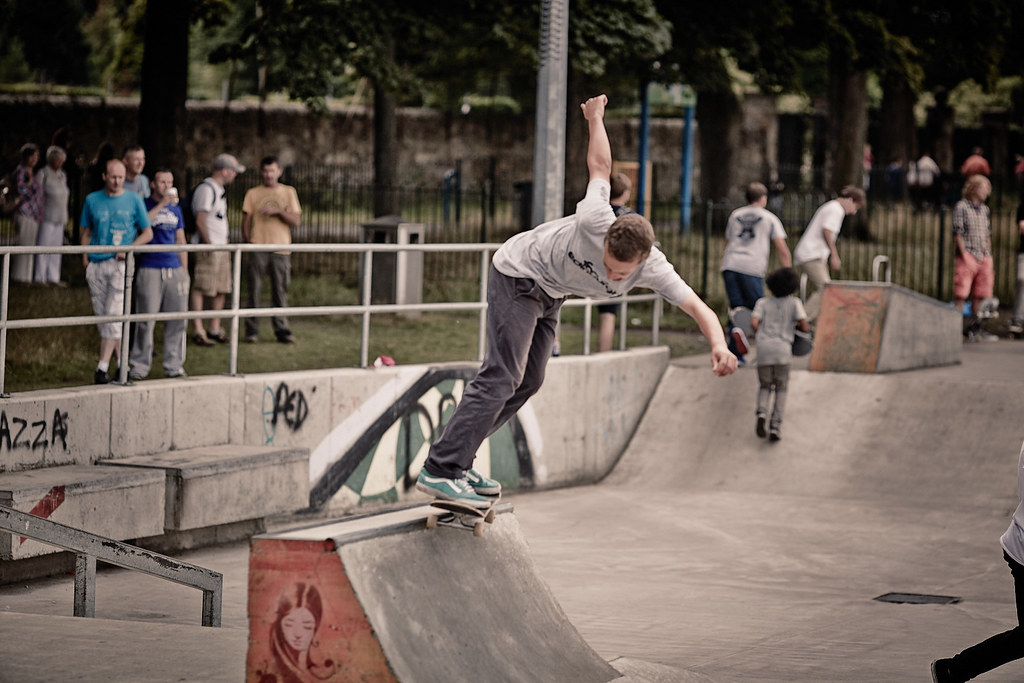